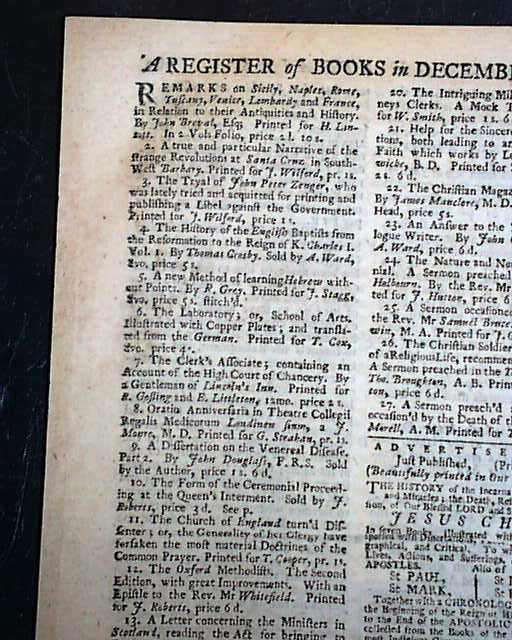 Item # 664834 THE GENTLEMAN'S MAGAZINE, London, December, 1737  The back page has a small note of the publishing of a book, reading: "The Tryal of John Peter Zenger, who was lately tried & acquitted for printing and publishing a Libel against the Government." This is the famed Zenger trial--publisher of the New York Weekly Journal--which gave America the landmark decision which established freedom of the press.
Among the articles noted in the table of contents are: "Of Female Industry in Ancient Times" "Of a Remarkable Tryal for a Libel" ""Dram Drinking in Women Exposed" "Character of her Late Majesty" "Three Ways of Increasing the Strength of a Nation" and more. Near the back is a section headed: "Historical Chronicle" with news from England & other parts of Europe.
No maps or plates are called for.
Complete in 62 pages, 5 1/4 by 8 1/2 inches, full title/index page featuring an engraving of St. John's Gate nice condition.