Home > Back to Search Results > The French & Indian War... A flying meteor...
Click image to enlarge 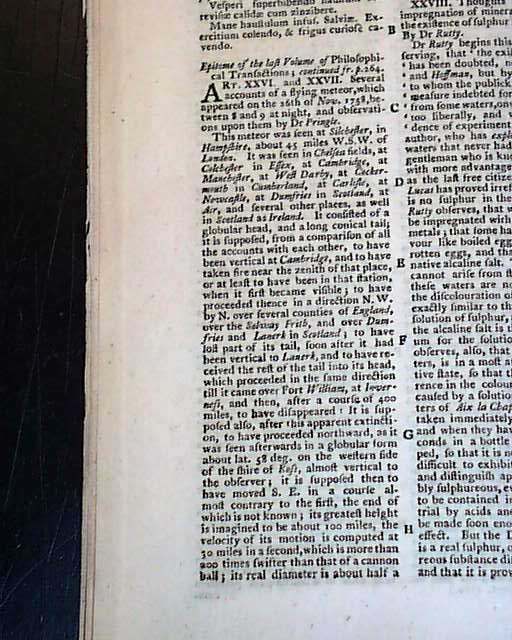 Item # 664833
THE GENTLEMAN'S MAGAZINE, London, Sept. 1760  Most of a column near the back of the issue is taken up with reports on the French & Indian War in America, portions including: "...account of Col. Montgomery's expedition against the Cherokees appeared in the public papers...that the troops under his command, after marching through passes the most dangerous men ever had to penetrate, they at length came to a plain covered with wood & brush...Through this infernal place...Capt. Morrison, of the Rangers, rushed in to scour & reconnoitre but fell instantly on the first fire; the grenadiers, light infantry & Highlanders advanced on all sides & drove the enemy from their lurking places...in these covers a handful of men may ruin an army. In this expedition 20 were killed & 77 wounded & the army returned to Fort Prince George on the 1st of July." and further on is: "...we learn that Gen. Amherst moved forward from Oswego the 7th of the said month & that Gen. Murray had gained some advantage over the Canadians." and further on is: "There is advice from the army at Oswego...that Brig. Moncton from Fort Pittsburg had joined Gen. Amherst at Oswego. From Crown Point we learn that Col. Haviland...would proceed forward near the same time...and Gen. Murray with most of his forces was going from the last place to meet Gen. Amherst at Montreal...that 6000 people had lately come to reside there from Long Island, Connecticut & other settlements; & that near 10,000 Indians had come over with a French priest who had sworn allegiance to his majesty...".
An inside page has a nice account of a flying meteor (see).
Complete in 48 pages, 5 1/2 by 8 1/2 inches, full title/index page, nice condition.