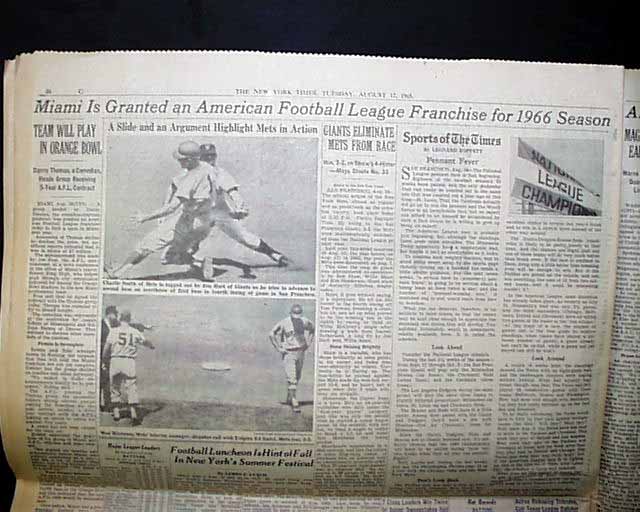 The sports page has a banner headline "Miami Is Granted an American Football League Franchise for 1966 Season" with subheads "Team Will Play In Orange Bowl" "Danny Thomas, a Comedian, Heads Group Receiving 5-Year A.F.L. Contract". "...The A.F.L. granted the Thomas group, the successful bidders among several groups seeking the franchise for the past several months, a five-year contract with the A.F.L. holding an option to renew for another five years. A name has not been chosen for the team yet... Once before Miami had a professional football team, the Miami Seahawks of the now defunct All-America Conference. Bu the team folded after only one year of play -- 1946...".
Also on the front page is "Calm Returning to Los Angeles; Death Toll is 33", with much more coverage on the Watts riots on pages 16 and 17. See photos for more details.
Other news of the day, sports and advertisements are within.
Complete in 56 pages, in nice condition.