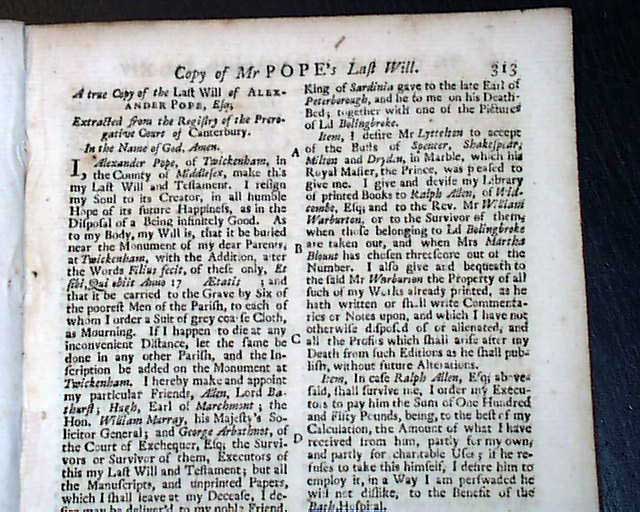 Item # 664570
THE GENTLEMAN'S MAGAZINE, London, June, 1744  An inside page has a report which includes: "...had a commission to be engineer with a salary of 15s a day, given him by Gen. James Oglethorpe who also conferred upon him many other favours having under pretence of sickness, left Georgia when the Spaniards came up to invade the same with a fleet and army of between 4 and 5,000 men, whilst Gen. Oglethorpe was doing his duty under great difficulty, upon his arrival in England, filed against him 19 articles & summoned many officers and soldiers from Georgia for witnesses..." with more. An early item on the troubles of Oglethorpe.
Among various other articles found in this issue as noted in the table of contents are: "A Copy of Mr. Pope's Last Will" which is signed by him in type: Alexander Pope. Also: "Character of Alexander Pope".
Included is a full page map: "The Austrian & French NETHERLANDS agreeable to the Barrier concluded at Antwerp and relative to the Present War." which is very displayable.
Complete in 56 pages, 5 by 8 1/4 inches, full title/index page featuring an engraving of St. John's Gate, good condition.