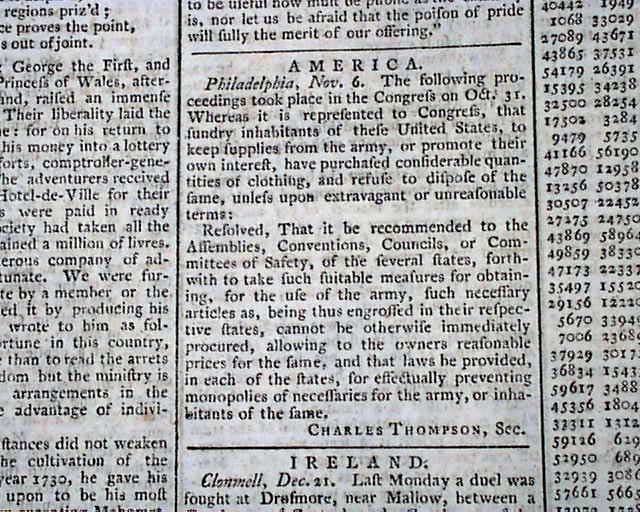 
THE LONDON CHRONICLE, England, Jan. 4, 1777  A page 2 item from Philadelphia headed "America" is concerning supplies for the army, noting: "...sundry inhabitants of these United States to keep supplies from the army or promote their own interest have purchased considerable quantities of clothing & refuse to dispose of the same unless upon extravagant or unreasonable terms..." followed by a "Resolve" to take "...such suitable measures for obtaining, for the use of the army, such necessary articles...& that laws be provided in each of the states for effectually preventing monopolies of necessaries for the army...".
Another report notes the arrival of Dr. Franklin from America.
Another report has a description of the county of West Chester in New York, with some content concerning General Washington, etc.
Nearly an entire page is devoted to the events in the New York City area concerning the British victories there which drove Washington out of the city with some content concerning Philadelphia & other events as well. The back page has further details concerning the military events in the New York area, being a "Summons sent to the Commander of Fort Washington".
Eight pages, 8 1/2 by 11 1/4 inches, various foxing, generally good condition.