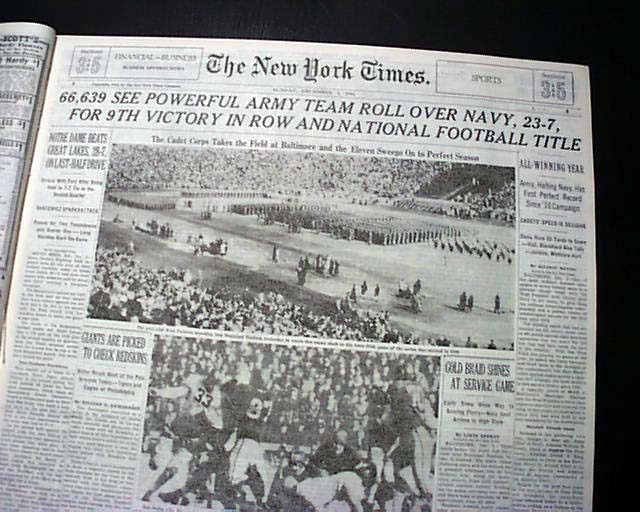 The front page of the sport's section which has it's own masthead (inside) has a nice banner headline: "66,639 SEE POWERFUL ARMY TEAM ROLL OVER NAVY, 23-7, FOR 9TH VICTORY IN ROW AND NATIONAL FOOTBALL TITLE" with subheads and two related photos. More on page 3 of this section with two more photos and stats. Loads of text. First report coverage on the Army Black Knights claiming their very 1st national college football title. Always nice to have notable events in history reported in this World famous publication.
Other news, sports and advertisements of the day with much on World War II. Complete in a thick 100+ page Sunday edition, this is the rare rag edition that was produced on very high quality newsprint, with a high percentage of cotton & linen content, allowing the issues to remain very white & sturdy into the present. Given the subscription cost, libraries & institutions rather than individuals were the primary subscribers of these high-quality editions. Very nice condition.