Home > Back to Search Results > Most famous of all Homer Civil War prints...
Click image to enlarge 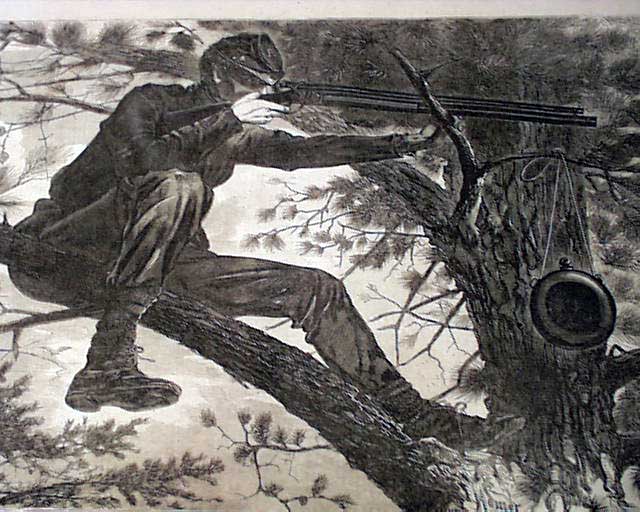 Although there are many fine prints in this issue certainly the most desired would be the full page Winslow Homer print titled: "The Army of the Potomac--A Sharp-Shooter on Picket Duty." The image is in very nice condition, however note that the caption & a portion of the bottom margin have a light tape stain.
Other nice prints in this issue include the full front page captioned: "Convalescent Soldiers Passing Through Washington to Join Their Regiments" in front of the Capitol, showing the new dome still under construction (a notable print!). Also a fullpg: "The Army of the Potomac--'Little Mac' Making His Rounds"; a three-quarter page: "Map of the Seat of War In Virginia"; a very dramatic doublepage centerfold: "The War For the Union--Surprise of Rebel Guerrillas by a Squadron of United States Cavalry.";  fullpg: "Destruction of a Rebel Salt Factory on the Coast of Florida..."; a halfpg. print of: "Summit Station on Maryland Heights" and a one-third pg: "The Rebel Steamer 'Oveto' running the Blockade of Mobile...".
The back page has a political cartoon: "The Pirate 'Alabama' ". Sixteen pages, very nice condition save for the print caption mentioned above.