Home > Back to Search Results > First woman nominee for VP on Democrat ballot... The KKK - The DNC decides position in 1924...
Click image to enlarge 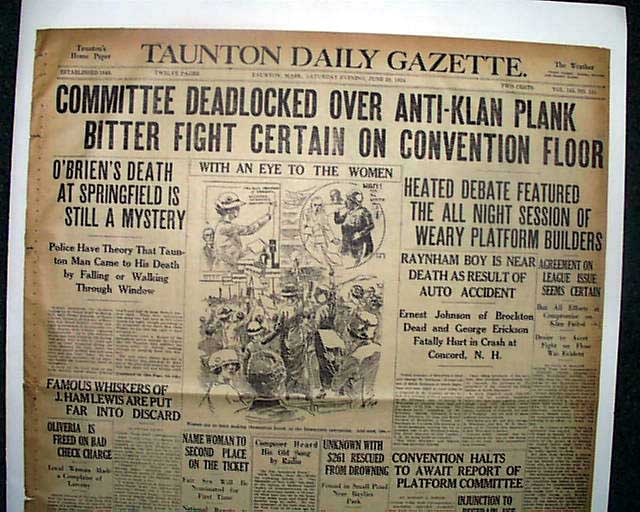 The front page of the June 28th issue has the 2-line, full-banner heading: "COMMITTEE DEADLOCKED OVER ANTI-KLAN PLANK - BITTER FIGHT CERTAIN ON CONVENTION FLOOR", with related subheading and considerable details of the convention. The front page of the June 30th issue has the full-banner: "BATTLE OF BALLOTS IS ON", which is in regards to their selection of their candidate, but includes the subheading: "Balloting Was Quiet and Orderly Without Recurrence of Disorders Over the Klan Issue of Saturday and Sunday." After many ballots and considerable conflict, it was eventually decided by a razor-thin margin to formally include a statement within their platform which would express their disapproval of the KKK. The Republican Party wrestled with this issue the following year.
Many other related articles are included in both issues, but two of the more interesting are found in the 2nd issue: "Voted Against Her Husband's Plank," and "DECISIVE BALLOT IN KLUX KLAN ARGUMENT WAS CAST BY WOMAN", the latter appearing on page nine.
Also historic is the front page article found on the issue dated the 28th: "NAME WOMAN TO SECOND PLACE ON THE TICKET", with the subheading: "Fair Sex Will Be Nominated for First Time", which told of Mrs. Leroy Springs' name being included as a nominee for Vice-President. Although seen as merely a symbolic gesture, Lena Springs did receive a few votes, and continued the progress of woman's role in politics.
Considering the influence of woman in this convention, it is nice to have the large illustration on the front page of the first issue which is headed: "WITH AN EYE TO THE WOMAN."

Both issues are complete, and although VERY fragile with minor edge tears, they are in overall good condition for the era. However, they must be handled with care, and an archival storage folder is recommended (both will for within one folder).