Home > Back to Search Results > John Marshall, a pioneer in the world of spectacles & optics...
Click image to enlarge 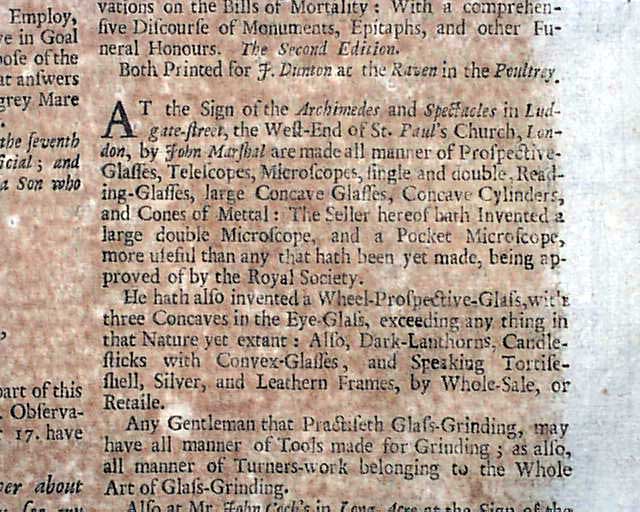 John Marshall, a pioneer in the world of spectacles & optics...

One of just four advertisements on the back page is a quite lengthy & descriptive ad beginning: "At the sign of the Archimedes and Spectacles in Ludgate street, the West End of St. Paul's Church, London, by John Marshal are made all manner of prospective glasses, telescopes, microscopes, single and double, reading glasses, large concave glasses..." with much more.
In the world of eye glasses, John Marshall was an early pioneer, having devised a method of grinding batches of identical, good quality, lenses of a specified focal length. For this he received a commendation by the Royal Society. He was also the optician to the King & Queen.
Complete as a single-sheet newspaper, 7 1/4 by 12 1/4 inches, foxing throughout, nice condition.