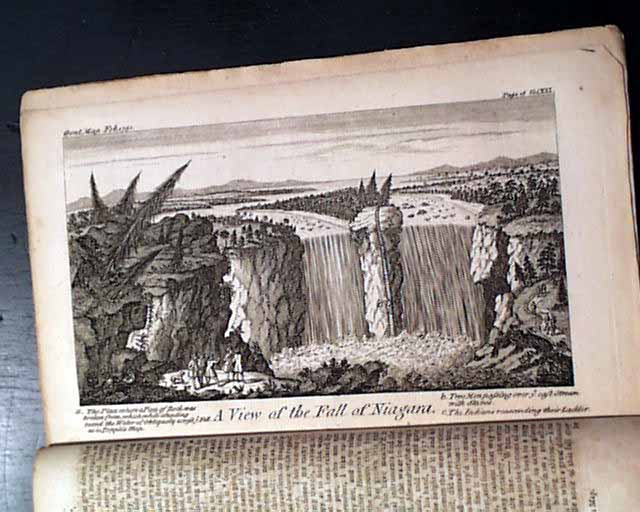 Item # 664275
THE GENTLEMAN'S MAGAZINE, London, January, 1751 The prime feature of this issue is the very nice full page plate captioned: "A View of the Fall of Niagara" which is accompanied by an article taking over 2 pages on Niagara Falls. Note: this plate is actually called for in the February issue but is more commonly found here so as to accompany the related article.
The other plate called for is lacking.
There are engravings of several fish and a two-headed snake, and a half page engraving of two "Rice Birds" with a related article on the devastation they cause in South Carolina.
Among the other articles noted in the table of contents are:
"Drunkenness & Gaming" "Account of the Burial of K. Charles I and Oliver Cromwell" "Mr. Watt's answer to Mr. Bingley on Electricity" & more.
Near the back are reports datelined: "Kingston in Jamaica" and "Jamaica", and "Halifax, Nova Scotia". Plus one datelined "Philadelphia" notes various ship arrivals, and that: "...brought 4317 Germans, there have arrived also 1000 passengers & servants from England & Ireland...". A lengthier account is headed: "Charles-Town (Charleston), S. Carolina, Nov. 10" and takes over 1 1/2 columns.
Complete in 54 pages, 5 1/2 by 8 3/4 inches with wide untrimmed margins, full title/contents page featuring an engraving of St. John's Gate, great condition.