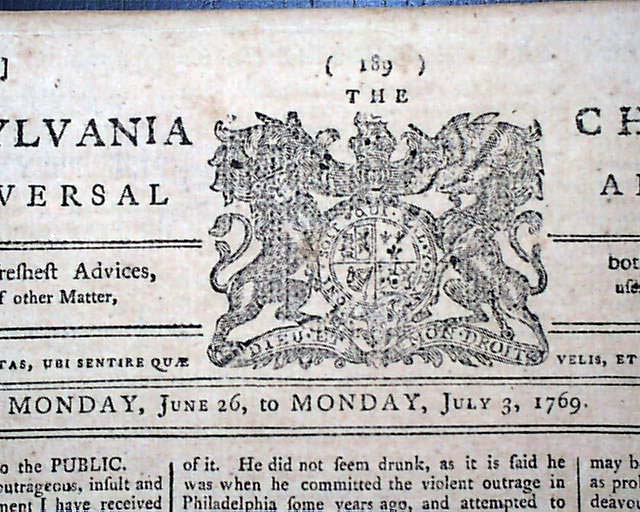 The front page includes an illustration relating to a new kind if water-powered mill (see). Page 3 has an interesting report of: "A bill for a charitable lottery for the relief of distressed Virgins in Great Britain" which begins: "Whereas, by the great & melancholy disuse of holy matrimony in the kingdom, an infinite number of his Majesty's female subjects are left upon the hands of their parents..." with more.
The entirety of page 4 is taken up with a great document from Annapolis, Maryland, being a resolution of non-importation. It includes a detailed and historic introductory document outlining the reasons, then specifically outlines the nine points of the non-importation resolution, beginning: "First, that we will not...directly, or indirectly, import or cause to be imported any manner of goods, merchandize or  manufactures which are...taxed by Act of Parliament for the purpose of raising a revenue in America..." with much, much more. It ends: "...The above Resolutions were subscribed by a number of the most considerable merchants, etc. of Maryland."
Another page has a significant letter from the Mass. Assembly to the governor, expressing their anger at the governor's response to their earlier complaints on his the military presence in Boston is a growing problem.
Complete in 8 pages, nice coat-of-arms engraving in the masthead, 9 1/2 by 11 1/2 inches, nice condition.