Home > Back to Search Results > Famous Lincoln cartoon on having won the election...
Click image to enlarge 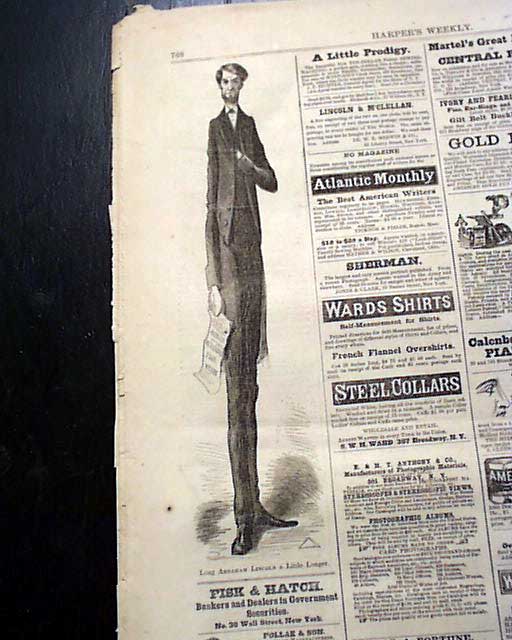 Famous Lincoln cartoon on having won the election...

The prime piece of this issue is the very famous back page political cartoon captioned: "Long Abraham Lincoln A Little Longer." showing an elongated version of him since he just won his second presidential election. This cartoon has become quite famous.
The entire front page is taken up with prints of: "Captain Napoleon Collins" "Capt. C.M. Morris" & one of: "The Captured Rebel Privateer' Florida' & the U.S. Steamer 'Wachusett' ".
Other halfpg. prints within include: "Before Petersburg--Fortifications on the Weldon Railroad" "...A View of the Weldon Railroad" "...Reinforcements Going to the Front" & "...'Mounted Infantry".
The dramatic doublepage centerfold shows: "Chase Of A Blockade Runner". Other prints in the issue include a fullpg: "Map Showing the Entire Field of Operations Under Grant, Sheridan, and Farragut", a halfpg. showing both: "Maj. Gen. Gershom Mott" & "W. W. Wood, Chief Engineer U.S. Navy" and a nearly halfpg: "President Lincoln's Home, Springfield, Illinois". Yet another nearly halfpg; shows a: 'View In Atlanta, Georgia".
Sixteen pages, ever bound nor trimmed, linen tape at the blank spine, good condition.