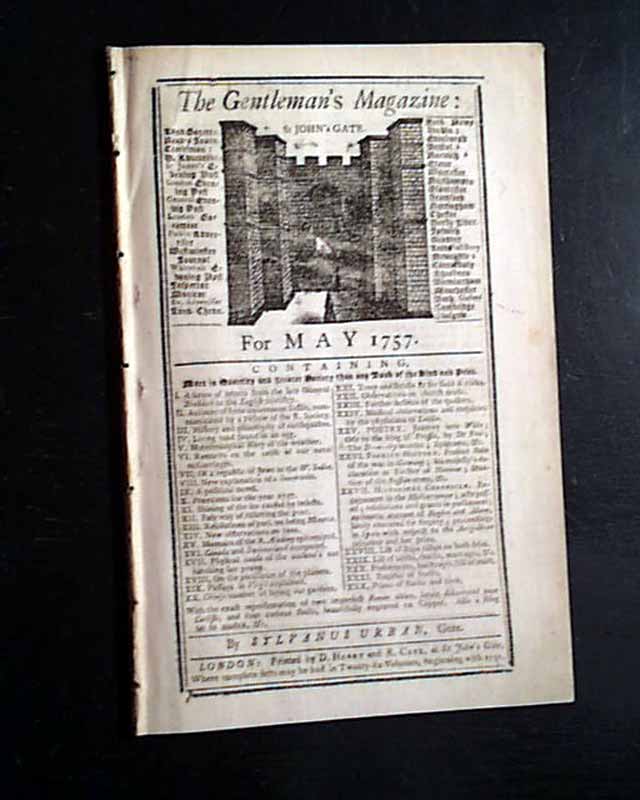 The first 2 1/2 pages have reports from the French & Indian War in America, including five letters written by General Braddock datelined Williamsburgh and Alexandria. In the introductory comments on the first page is mention that: "...concerning the territories in America mention'd in the treaty of Utrecht; of several Indian traders seized by the French on the Ohio, and sent prisoners to France, but afterwards enlarged on the interposition of Lord Albemarle; and of the murder of Mr. Jumonville by a party of English under Major Washington. We have also...given an account...of the expedition & defeat of General Braddock..." with more (see). Rare & very early mention of George Washington and great to have his name on the first page.
Another article: "Account of a Colony of Jews in the East Indies" begins: "Not long ago I accidentally met with a New account of the East Indies, by Capt. Alexander Hamilton, in which, among other curious particulars, he says...that at the city of Couchin in times of old was a republic of Jews who were once so numerous that they could recon about 80,000 families but at present they are reduced to 4000. They have a synagogue at Couchin..." with more (see). This articles takes about a page.
Included are both plates called for, one of which is a foldout (see).
Complete in 52 pages, 5 1/2 by 8 1/2 inches with wide untrimmed margins, full title/contents page which includes an engraving of St. John's Gate. Very nice condition.