Home > Back to Search Results > Reference to the Boston Tea Party... Capt. Cooks 2nd voyage around the world...
Click image to enlarge 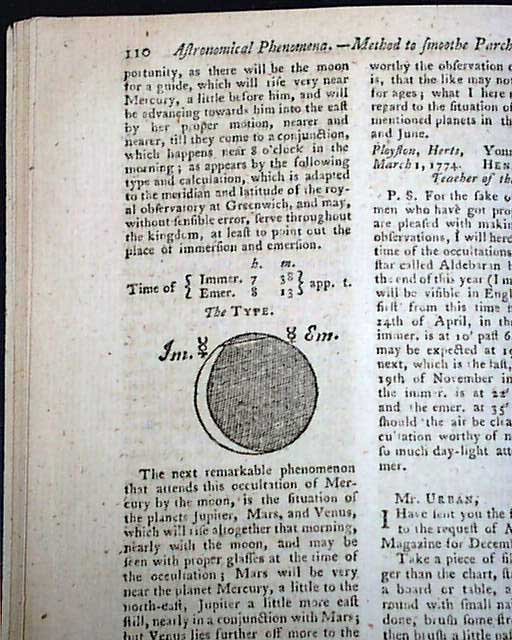 Reference to the Boston Tea Party... Capt. Cooks 2nd voyage around the world...

Item # 663979 THE GENTLEMAN'S MAGAZINE, London, March, 1774  Perhaps the best item in this issue is the 3 page article titled: "An Epitome of the Voyage Round the World by Lieutenant Cook..." which is concluded from a previous issue. This was Cook's second voyage of three around the world, this one lasting from 1772-1775. In his third voyage he would be killed by natives in Hawaii in 1779.
Near the back is the "Historical Chronicle" which has the latest news reports of the day including some news from America. One portion references the Boston Tea Party: "...Lord North...set forth that the inhabitants of Boston had been the ringleaders in all the riots in America for seven years past; that they had committed a great outrage by destroying the tea on board the ship that had brought it, and had sent advice to the other governments to spirit them up to act in the same manner; but that the other provinces and behaved with more prudence & their tea was returned safe back..." with more.
Among other items in this issue are: "Astronomical Phenomena" which includes a little illustration, "Lord Camden's Sentiments Concerning the Right of Taxing America", and "An Account of an intended Navigable Canal from Waltham Abbey to Moorfields" which is accompanied by a foldout map, measuring 8 by 21 inches. This is the only plate called for.
Complete in 48 pages, 5 1/2 by 8 1/2 inches, full title/contents page featuring an engraving of St. John's Gate, very nice condition.