Home > Back to Search Results > First report of the assassination of Abraham Lincoln...
Click image to enlarge 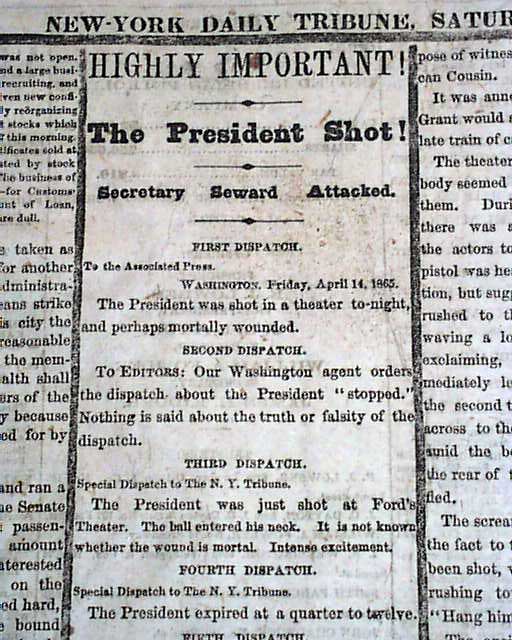 First report of the assassination of Abraham Lincoln...

This newspaper had already set their front page Civil War reports when the news of Lincoln's assassination came in causing them to report the tragic news on an inside page.
The photos show the page four column heads stating that President Lincoln had been shot. Included are twelve dispatches which chronicle the events and provides various particulars based on the best reports available. At press time this newspaper still reports Lincoln being alive.
The first dispatch, dated "Friday, April 14, 1865", simply states: "The President was shot in a theatre tonight, and perhaps mortally wounded." Each subsequent dispatch provides more information, and in the sixth it mentions that "At about 10 1/2 o'clock, in the midst of one of the acts, a pistol shot was heard, and at the same instant a man leaped upon the stage from the same box occupied by the President, brandished a long knife, and shouted, "Sic semper tyrannis!" The next dispatch mentions Lincoln's condition and reveals the identity of the assassin: "No hopes are entertained for his recovery. Laura Keene claims to have recognized the assassin as the actor, John Wilkes Booth." Much more in the remaining dispatches, especially with regard to Lincoln's hopeless condition, as well as the confusion as revealed in the last dispatch: "The accounts are confused and contradictory....We go to press without knowing the exact truth, but presume there is the slightest ground for hope..." All columns on all pages are black-bordered to commemorate this tragic event.
Complete in 8 pages, never bound, various dirtiness to the top half of pages 1 and 5 with a bit more scattered, otherwise good condition.

Lincoln initiates the building of a t...