Home > Back to Search Results > Just after the death of King Charles II...
Click image to enlarge 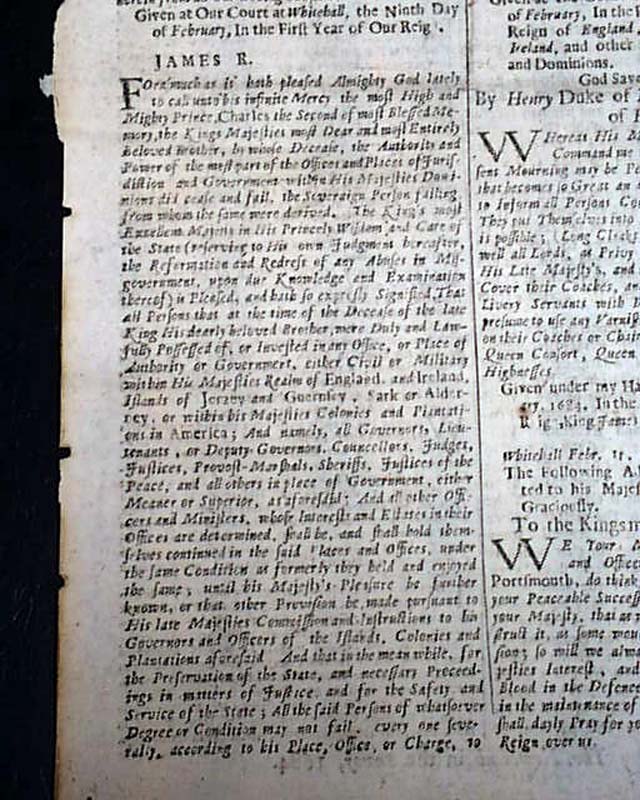 Just after the death of King Charles II...

* Charles II of England death
* Best title to be had ?

A nice issue concerning the death of King Charles II, who just died a few days earlier on Feb. 6. This is the first issue of this title published after the Feb. 9 announcement of the king's death.
About half of the ftpg. is taken up with a report which begins: "For as much as it hath pleased Almighty God lately to call unto his infinite Mercy the most High and Mighty Prince, Charles the Second of most Blessed Memory..." with much more. This is followed by an item from the Duke of Norfolk concerning mourning for the late King, beginning: "Whereas His Majesty hath been pleased to command me to take care that his present Mourning may be performed with that decency that becomes so great an occasion...'tis expected they put themselves into the deepest mourning that is possible..." with more. And this is followed by an address to the new King, James II, congratulating him on his accession to the throne, beginning: "We your majesties Loyal subjects & Officers within your garison of Portsmouth do think it our duty to congratulate your peaceable succession to the crown..." with a bit more on the back page as well.
Complete as a single sheet newspaper, 6 by 11 inches, some foxing & light dirtiness.