Home > Back to Search Results > Congress' heated response to the King...
Click image to enlarge 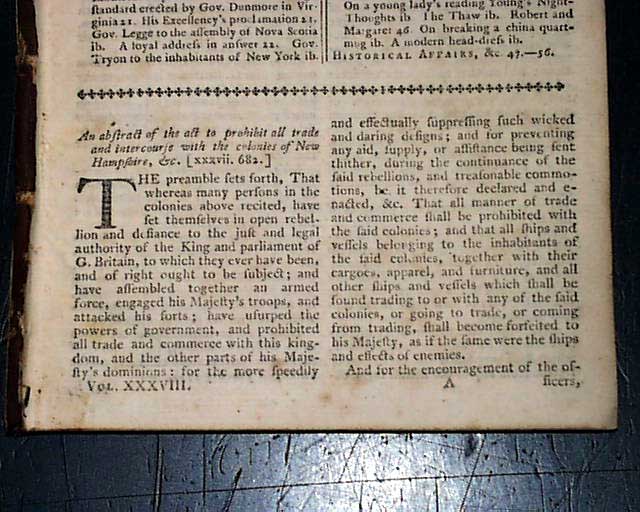 
THE SCOTS MAGAZINE, Edinburgh, January 1776  The ftpg. has: "An Abstract of the Act to Prohibit all Trade & Intercourse with the Colonies of New Hampshire, etc."
Of special note is a full printing of the heated response of Continental Congress to the King declaring the colonies to be in a state of open rebellion, dated: "Philadelphia, December 6". Some of the great text includes: "We the delegates of the 13 United Colonies...have taken into our most serious consideration a proclamation issued from the court of St. James's on the 23d day of August...We are accused of 'forgetting the allegiance which we owe to the power that has protected & sustained us'...What allegiance is it that we forget? Allegiance to parliament! We never owed--we never owned it. Allegiance to our King! our words have ever avowed it...We condemn & with arms in our hands...we oppose the claim & exercise of unconstitutional powers to which neither the crown or parliament were ever entitled..." with much more.
There is also much on: "America: Military Operations in Canada" and a great wealth of other reports on the war, too much to note here but potions shows in the photos. Then a review of a book: "The Rights of Great Britain Asserted Against the Claims of America: being an Answer to the Declaration of the General Congress" which takes 4 1/2 pages.
Complete in 56 pages, 5 by 8 inches, disbound with title & "contents" on page 1, very nice condition.