Home > Back to Search Results > Naval action in the Chesapeake... Mention of John Paul Jones... The Franklin Stove...
Click image to enlarge 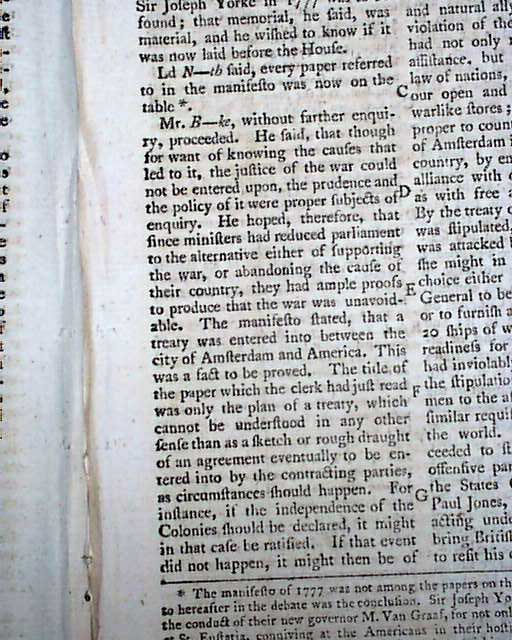 Naval action in the Chesapeake... Mention of John Paul Jones... The Franklin Stove...

"Summary of Proceedings in the Present Parliament" has some nice talk concerning America & the Revolutionary War, including in part: "...that a treaty was entered into between the city of Amsterdam and America...For instance, if the independence of the Colonies should be declared, it might in that case be ratified..." with more on the Dutch alliance. Further on is: "...their suffering Paul Jones, a Scotchman and a pirate acting under no legal authority to bring British shops into their ports & to refit his own...".
Near the back are some items concerning the Revolutionary War including reports on events in West Florida, and another report noting "...arrived off Sandy Hook with 14 sail of the line, 4 frigates, one sloop...M. De Barras, with the French squadron under his command, had sailed the Saturday before from Rhode Island...approached the Chesapeak on the morning of the 5th of September...discovered a number of large ships at anchor which seemed to be extended across the entrance of the Chesapeak from Cape Henry to the Middle Ground...made the signal to bear away & approach, & soon after to engage the enemy close..." with much more on the naval action in the Chesapeake, taking about a full page. These would be the preliminary events to the closing battles of the Revolutionary War, as before the end of October Cornwallis would surrender to Washington at Yorktown, Virginia.
Another feature of this issue is an article titled: "The Pennsylvanian Fire-Places, Commonly known by the Name of American Stoves invented by Dr. Franklyn & Improved by Mr. Sharp..." which is a nice item on the Franklin Stove with the text taking over a full page (see photos for portions). Accompanying this is a nice foldout plate titled: "American Stoves on the Improved Construction" showing 5 stoves.
The mentioned plate is the only plate called for in this issue.
Complete in 56 pages, full title/contents page featuring an engraving of St. John's Gate, 5 1/4 by 8 inches, very nice condition.