Home > Back to Search Results > Terrific account of the legendary life of Wild Bill Hickok...
Click image to enlarge 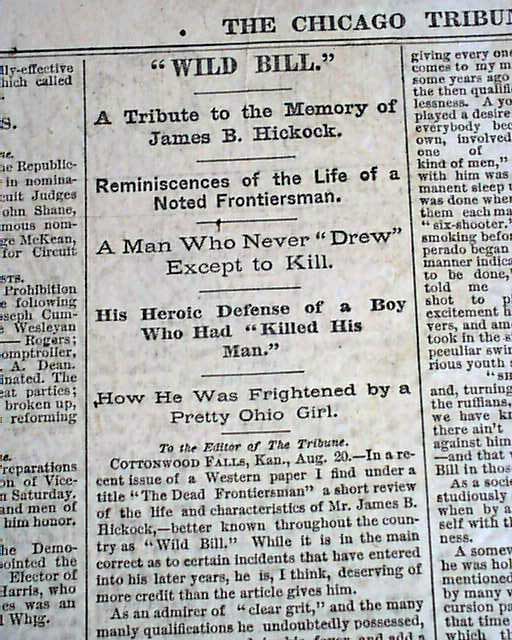 Terrific account of the legendary life of Wild Bill Hickok...

Page 2 has perhaps the finest obituaries we have seen on the death of Western legend Wild Bill Hickok.
Fully 1 1/2 columns contain all the details, with the top of a column headed: "WILD BILL" "A Tribune to the Memory of James B. Hickock" "Reminiscences of the Life of a Noted Frontiersman" "A Man Who Never 'Drew' Except to Kill" "His Heroic Defense of a Boy Who Had 'Killed His Man' " "How He Was Frightened by a Pretty Ohio Girl".
The report has a tremendous amount on is life, career and his disposition. A few bits include: "...Bill to regard him as one of the best examples of the best class of our Western frontiersmen...As I looked at him I thought his the handsomest physique I had ever seen...Bill stood 6 feet and an inch in his right yellow moccasins...The eyes...are as gentle as a woman's...For a man who had led so wild and careless a life he was exceedingly temperate...He had no intimate friends to betray him & trusted to his well-knit muscles and pistols to defend him in difficulties His arms were Colt's 'navies' and in the rapid & wonderfully accurate use of them it was admitted he had no equal in the West...The secret of Bill's success was his ability to draw & discharge his pistols with a rapidity that was truly wonderful...When he drew his pistols it was always to shoot...It is true that he has killed a great many men; but in a large number of cases it was done se defendendo..." and just so much more.
Eight pages, never bound nor trimmed, foxing at the ftpg. folds & a tiny hole at the front leaf fold juncture. Generally in very nice condition.