Home > Generals Crook & Custer & the battle with the Sioux...
Click image to enlarge 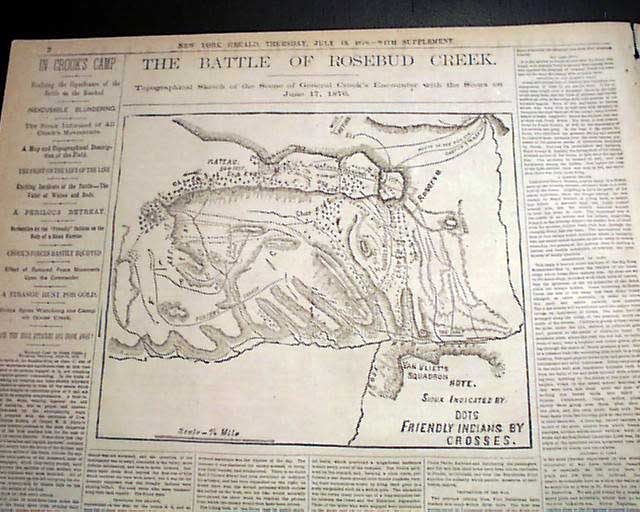 Generals Crook & Custer & the battle with the Sioux...

Page 2 is very graphic, containing a quite large & displayable map headed: "THE BATTLE OF ROSEBUD CREEK. Topographical Sketch of the Scene of General Crook's Encounter with the Sioux on June 17, 1876", plus there are many one column heads on the same page, including: "IN CROOK'S CAMP" "Realizing the Significance of the Battle on the Rosebud" "Inexcusable Blundering" "The Sioux Informed of All Crook's Movements" "A Perilous Retreat" "Crook's Forces Hastily Equipped" and more.
The rest of this page & some of page 3 are taken up with some very detailed reports of the battles with the Sioux. This was part of the overall campaign against the Sioux Indians, this being the first encounter, and just 8 days later Custer would ignore his orders and proceed against the Sioux to disastrous results. The text, more so on page 3, has some nice coverage of the Custer battle, with subheads including: "An Officer's Diary--Custer's Battle Field & Reno's Rescue--Horrible Scenes & Ghastly Relics of the Slain" "Rumors of Disaster" "Custer's Desperate Strait" "Pushing Ahead" "Anxiety About Custer" "Relics of Custer's Men" "The Slain Custers" "Shocking Mutilations" and more.
On pg. 5 are heads concerning a memorial for George A. Custer. Complete in 10 pages, very nice, clean condition.

Follow-up on the Custer Massacre...