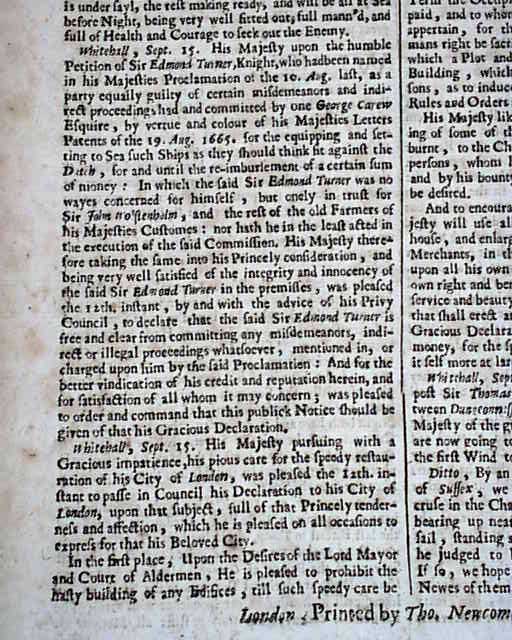 
THE LONDON GAZETTE, England, September 17, 1666  Certainly one of the more notable events in London history was the Great Fire which began on September 2. Very shortly thereafter, in an effort to rebuild London in a safe manner, the King issue various directives as to how the city would be rebuilt.
This text takes nearly half of the back page with a few portions including: "In the first place, upon the desires of the Lord Mayor...He is pleased to prohibit the hasty building of any edifices till such speedy care be taken for the re-edification of the city as may best secure it from the like accidents, & raise it to a greater beauty and comeliness than formerly it had...required to pull down what shall  contrary to this Prohibition be erected...no person erect any house or building but of brick or stone...strongly arching their cellars by which divers persons have received notable benefit in the late Fire. That Fleet Street, Cheap-side, Cornhill, and all other eminent streets, be a breadth to prevent the mischief one side may receive from the other by fire..." with much, much more. The text essentially created an early form of a "building code" to prevent similar disasters in future.
Great to have this report in the London Gazette, and from less than 2 weeks after the fire ended.
Complete as a single sheet newspaper, 7 by 11 inches, very nice condition.