Home > Back to Search Results > A slave ship was cast away at sea... America mention...
Click image to enlarge 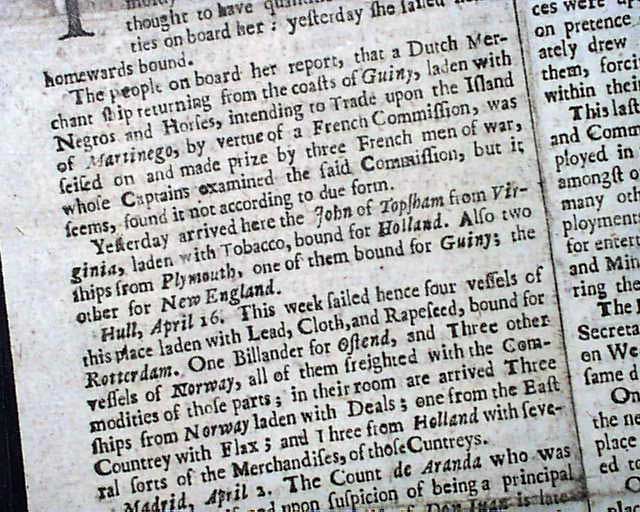 A slave ship was cast away at sea... America mention...


THE LONDON GAZETTE, England, April 21, 1670  The front page has an item noting: "Yesterday arrived here the John of Topsham from Virginia, laden with Tobacco bound for Holland. Also two ships from Plymouth, one of them bound for Guiny; the other for New England."
And the bkpg. has a bit about a slave ship: "Arrived lately in the Downs the Adventure from Jamaica, informing that the Panther, laden from Guiny with Negroes, was on the 19th of January last, cast away upon the coast of Jamaica but saved all her own men, and most of the Negroes."
Nice to find mention of colonial America in 17th century newspapers.
Single sheet, 7 by 11 1/4 inches, some foing to an upper quadrant, generally nice condition.