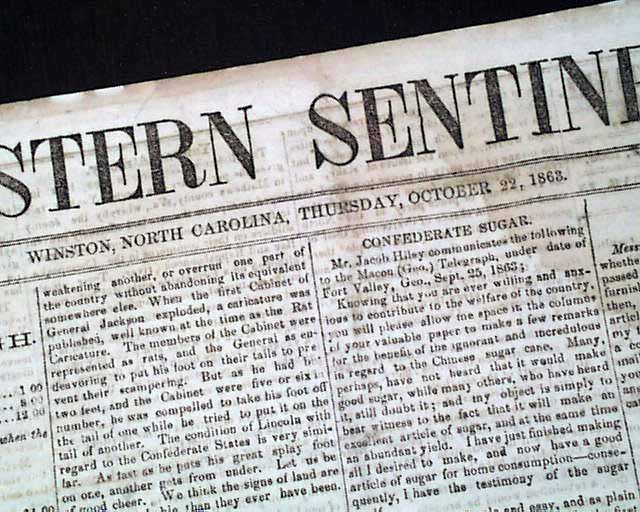 
WESTERN SENTINEL, Winston, North Carolina, Oct. 22, 1863   This is a very rare title from the Confederacy. According to Brigham only four institutions in the United States have any holdings of this title from the Civil War, most just a few scattered issues. The American Antiquarian Society has no issues recorded from this era.
The ftpg. contains several war related reports including items headed: "Signs of Flagging" which begins: "All the Yankee papers which we receive are filled with braggadocio--speaking always of the crushing out of the rebellion as though it were already an accomplished fact..." with much more (see photos for portions). Also on the ftpg: "A Hopeful View--Be Patient" "Confederate Sugar" "The Powder Used in the Big Gun at Charleston" "Lincoln President For Life" and more.
The Civil War reporting carries over to take much of pgs. 2 & 3 as well with items headed: "The News" "The Late Northern Elections" "Northern Items" "Doings of Gen. Lee's Army" which takes almost an entire column; "East Tennessee & South Western Virginia--The Salt Works in Danger" "From the West--Bragg's Army" and more.
The back page is mostly taken up with ads but it does have a few reports, including: "Anecdote of Gen. Ewell" and "Sensible Colored Folks".
Complete in four pgs., light water stain in the upper right, a bir irregular with minor loss at the spine, generally very nice.