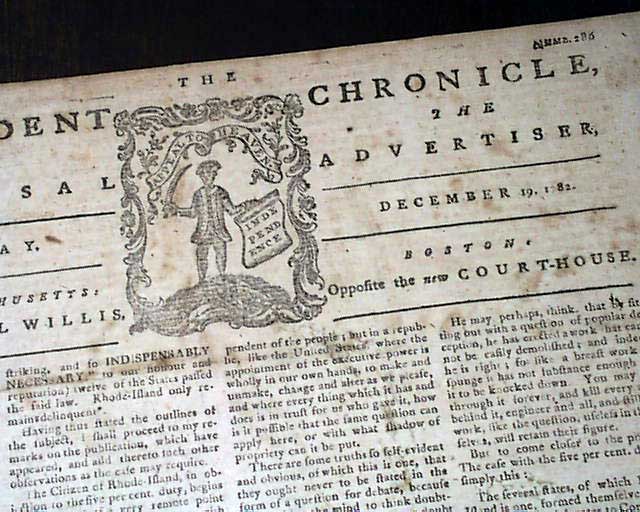 
THE INDEPENDENT CHRONICLE, Boston, Dec. 19, 1782  A nice feature of the masthead is a great engraving taken after one done earlier by Paul Revere, showing a patriot soldier with a sword in one hand and a scroll reading "Independence" in the other.
Page 2 has a report from London noting in part: "Governor Franklin, who lately arrived from New York had...a long conference with his Majesty at St. James's relative to American affairs & had the honor of laying...the address of the Loyalists in New York to his Majesty...on the very extraordinary epistle of the latter to the rebel General Washington, declaring the colonies Independent States without any stipulation whatever."
A pg. 3 report notes in part: "...who have been prisoners with the enemy at Charlestown...are of opinion that American colours are now flying on the fortifications of that capital, it being the avowed invention of the enemy to evacuate it on the 25th...if not sooner...". This is followed by a report concerning General Marion's troops noting: "...the enemy court even the assistance of the negroes in the southern States. These poor wretches desert their homes & place themselves under the k protection of the British commanders, but too late repent their follow as every species of drudgery is assigned to them...". Yet another item notes in part: "...intelligence from Charlestown...the enemy were in possession of that garrison...50 families had...gone out to General Greene by capitulation..." and more. Also: "...are told that Sir Guy Carleton will shortly return to Britain...goes home in disgust, conceiving himself ill treated by the Ministry...that Britain was heartily tired of the war & was ready to make peace with us almost upon any terms whatever...".
Four pages, a bit of archival strengthening at the spine, a bit of foxing, nice condition.