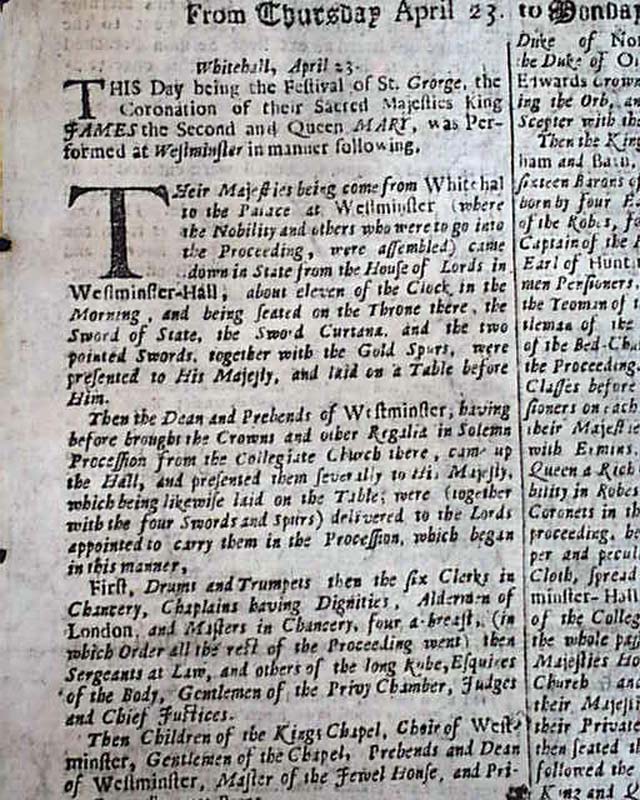 THE LONDON GAZETTE, England, April 23-27, 1685  This is one of the more desirable & historic events of the period, with the entire front page & some of the back page taken up with the coronation of King James II and Queen Mary. The report is datelined April 23 and has a one paragraph preface reading: "This day being the Festival of St. George, the Coronation of their sacred Majesties King James the Second and Queen Mary was performed at Westminster in manner following..." and what follows is the lengthy text on the ceremonies.
Given the historic nature of this report the full text is shown in the photos below, portions including: "...the King took the accustomed oath, and Veni Creator being sung, and the King disrobed of his Mantle and surcoat he was anointed and invested with all the sacred habits in King Edwards chair; and the crown being put on just at three of the clock in the afternoon all the people shouted, the drums and trumpets sounded...The King being Crowned, and having been farther invested with the ring and scepters...Then followed the coronation of the Queen, at which the Ladies likewise put on their coronets...Her Majesty having received into her hands the scepter and ivory rod, was conducted to Her Royal Seat upon the Throne..." with more.
Terrific to have this report not only on the front page, but in the London Gazette, and in an issue of the same date as their coronation. Exceedingly rare.
Complete as a single sheet newspaper 6 1/2 by 11 inches, even toning & light dirtiness, minor wear at margins, generally good condition.