Home > Back to Search Results > The Fort Pillow massacre...
Click image to enlarge 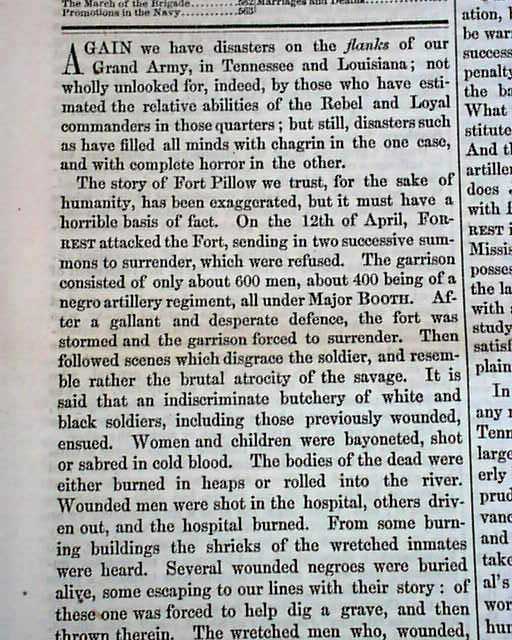 
ARMY & NAVY JOURNAL, New York, April 23, 1864  As noted in the masthead this was the: "Gazette of The Regular & Volunteer Forces" and as such is replete with military news of all sorts.
Among the war-related items in this issue are those headed: "A Richmond View of General Grant" "Rear-Admiral Porter's Views Upon Iron-Clads" "Report of Commodore John Rodgers" "The March of the Brigade" and much more.
"The Fort Pillow Massacre" is a nice editorial report on it, beginning: "Though we have heretofore lacked something of positive proof to confirm the reports that the Rebels were carrying into action the threats with which they had responded to our proclamations of emancipation & our enlistment of negro troops...The result is shown in the particulars...of the massacre of our negro troops at Fort Pillow, Tennessee...". There is much more on Fort Pillow on the front page as well.
Sixteen pages, 10 by 14 1/2 inches, nice condition.