Home > Back to Search Results > The slave case of Matilda Lawrence... On the 'Trail of Tears"...
Click image to enlarge 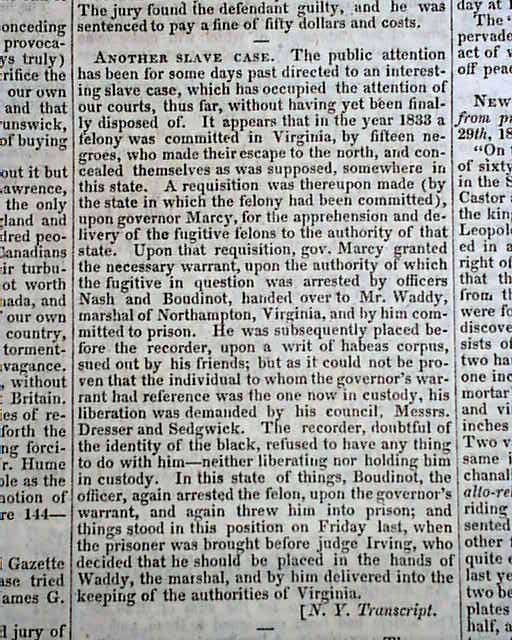 The slave case of Matilda Lawrence... On the 'Trail of Tears"...

The most notable report is a page 5 item headed: "Slave Case" which is  the fascinating case of slave Matilda Lawrence.
Abolitionist William Birney, who published "The Philanthropist" hired friend & future Supreme Court  Chief Justice Salmon P. Chase, to defend Matilda. As a website notes: "On 11 March 1837, at 9:30 a.m., Chase made a widely-read, logos-based defense of Matilda’s right to freedom that would rock the nation to its core. He asked not for sympathy but for careful ears in this case under national spotlight. The results of this case could forever influence U.S. democracy, law, and society. He insisted that this fame and any emotions toward Matilda—racist or sympathetic—do not intervene in sound judgment."
Also inside is: "Yet Another Slave Case--Riot" which reports on the riot caused after the trial of a runaway slave.   "New Discoveries In Pompeii". And the back page has a bit on the Trail of Tears with: "The Creek Indians" beginning: "A letter From Fort Gibson...states that the Creek Indians have been to & examined their new country, and are not satisfied with it...they are returning in small parties...on their way back to Florida...as soon as he is prepared, to go & take a more congenial country in Texas...".
Sixteen pages, 8 1/4 by 12 inches, bit of foxing, ink stain to the back leaf, good condition.