Home > Back to Search Results > "The Jimi Hendrix Experience" Tour - top five tours of all time... The Doors...
Click image to enlarge 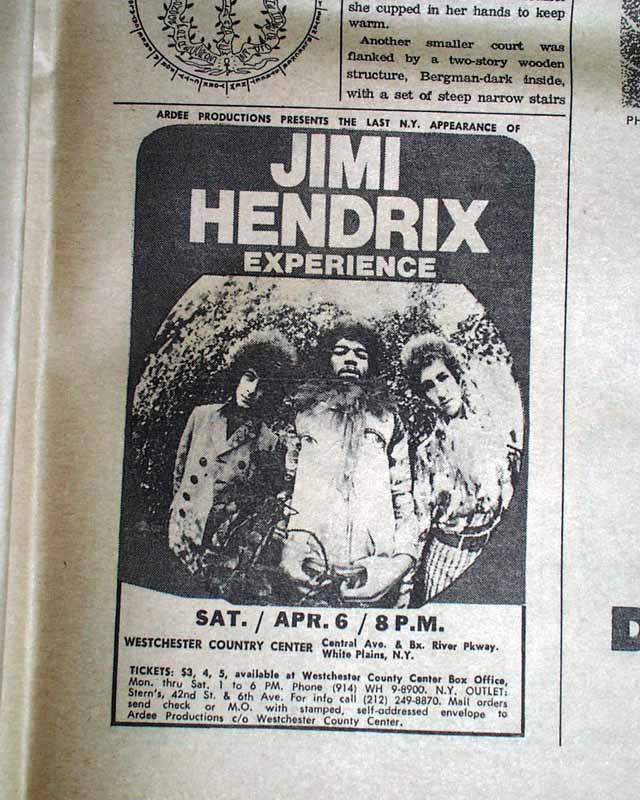 "The Jimi Hendrix Experience" Tour - top five tours of all time... The Doors...

"The Jimi Hendrix Experience" worldwide tour is considered among many to be one of the greatest tours of all time. This iconic newspaper from Greenwich Village contains not one, but two large ads for performances to be held at nearby locations. Ironically, the Cafe Au Go Go, sight of one of Jimi's most noteworthy "concerts", did not advertise his appearance which occurred a mere 3-days later, even though it was common for them to advertise their schedule far in advance.
Other ads include The Doors, Tiny Tim, The Yardbirds, Spanky & Our Gang, the prior issue of the issue which featured The Beatles (with photo of the cover included), and more. Also present is a large ad for the soundtrack of the musical "HAIR".
The newspaper is complete in 64 pages, has only minor margin-contained edge-tears, and is in overall good condition.