Home > Much on Shays' Rebellion...
Click image to enlarge 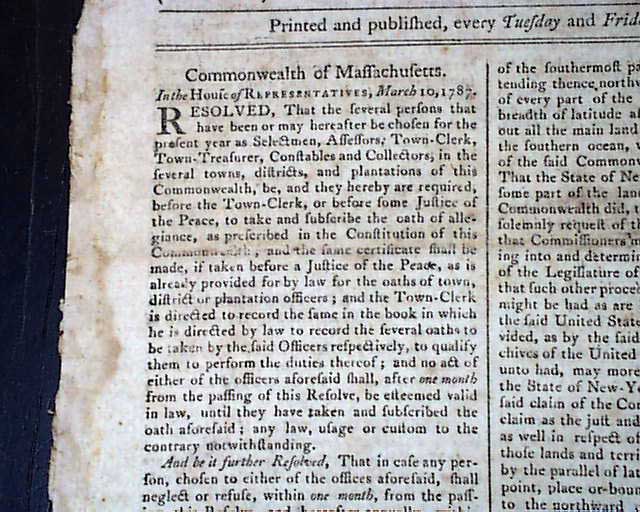 Much on Shays' Rebellion...


THE MASSACHUSETTS GAZETTE, Boston, March 13, 1787 This newspaper published for just three years, from 1785-1788. Content includes a ftpg. resolution signed in type: James Bowdoin, a lengthy pg. 2 letter to the legislature is signed by him as well; a report discussing the celebration of Washington's birthday at Petersburg, signed in type: John Hancock
. Pg. 3 has a "Proclamation" issued by Governor Chittenden of Vermont which mentions the "wicked Rebellion" in Massachusetts and identifies Daniel Shays, Luke Day and others as the "...the principal aiders and abettors of said Rebellion..." warning the citizens: "...not to harbour, entertain or conceal the said Daniel Shays, Luke Day, Adam Wheeler, and Eli Parsons."  Several more mentions of Shays in a letter from New York.
Over half of the back page is taken up with Shays' Rebellion content.
Four pages, wear at the margins with some letter loss to a portion of the front page right margin, some margin tears, light damp staining.