Home > Back to Search Results > Washington is elected President...
Click image to enlarge 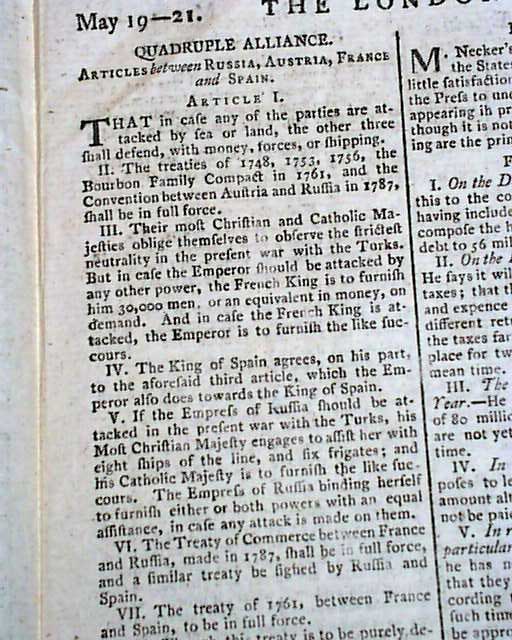 An inside page has a very historic report, noting the election of George Washington as the very first President of the United States.
The full report can be seen in the photos, however portions include: "A letter from New York...says, 'That the Federal Congress was convened...was found that George Washington, Esq. was unanimously elected President, and John Adams, Esq. with very few dissidents, Vice President of the United States. These appointments...had diffused the most universal transports of joy, & that the immediate adoption of such measures as should secure unanimity at home & respectability abroad, was expected..." with more.
When such an account in an American newspaper would command in excess of $3000 if available at all, having this same report in a period, English language newspaper becomes increasingly desirable because of its affordable price.
Amongst other various reports and advertisements in this issue is a complete printing of the: "Quadruple Alliance. Articles between Russia, Austria, France, and Spain" with all eleven Articles printed.
Eight pages, never bound nor trimmed with wide margins, 9 1/4 by 12 inches, nice condition.