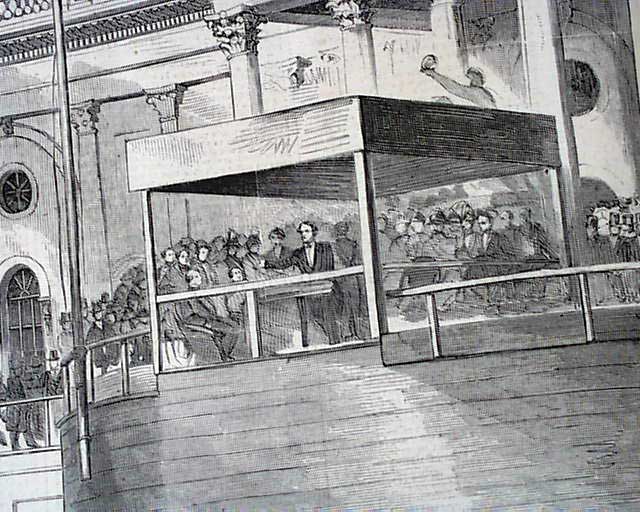 
HARPER'S WEEKLY, New York, March 16, 1861  The entire front page shows: "The Inaugural Procession at Washington Passing the Gate of the Capitol Grounds" which shows Abraham Lincoln & James Buchanan in the carriage.
Inside has a nearly half page print showing: "Presidents Buchanan and Lincoln Entering the Senate Chamber Before The Inauguration" with related text headed: "The Inauguration". Plus there is a large and dramatic, tipped-in doublepage centerfold done by Winslow Homer captioned: "The Inauguration of Abraham Lincoln as President of the United States, at the Capitol, Washington, March 4, 1861". Lincoln can be seen at the podium in front of the Capitol.
Other prints in this issue include: "The Washington Arsenal" "Fort David, Texas, Headquarters of the Eighth Infantry", "Fort Arbuckle, Texas" and "Fort Wachita, Texas".  Also: "The Navy Yard at Norfolk, Virginia" plus some interior scenes of Fort Sumter. And a nearly half page of: "The U.S. Frigate 'Sabine' Off Fort Pickens".
The back page is mostly taken up with 3 cartoons, including: "Office-Seekers at Washington During the Inauguration." Sixteen pages, slightly irregular at the spine, nice condition.