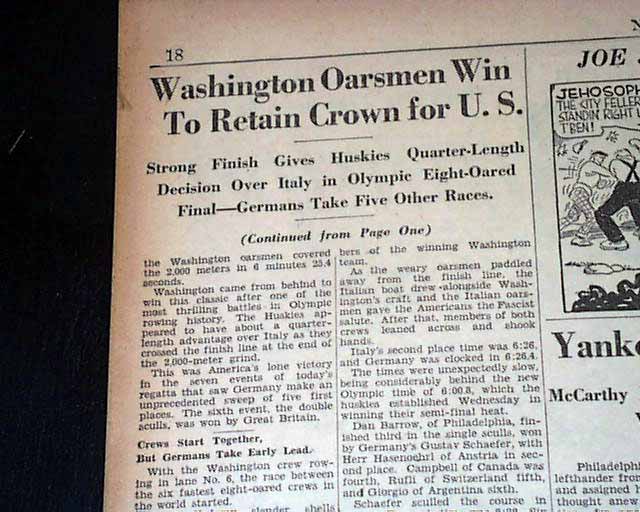 Near the bottom of the front page is a one column heading: "WASHINGTON EIGHT WINS OLYMPIC TITLE" with subhead. (see) The top of page 18 has a two column heading: "Washington Oarsmen Win To Retain Crown for U.S." with subhead. (see) First report coverage on the University of Washington Huskies crew winning the gold medal vs. Nazi Germany in the 1936 Summer Olympics in rowing.
Complete with all 28 pages, light toning and a little wear at the margins, small library stamp within the masthead, small binding holes along the spine, generally good.
wikipedia notes: The rowing competition was dominated by the hosts, Germany, who medaled in every event and took five of the seven gold medals. The final race, men's eights, was won by a working-class United States team from the University of Washington who, in what had become their trademark, started slow and outsprinted the competition to an exceedingly close finish, with only one second separating the top three finishers at the end of a six-and-a-half minute race. This event is chronicled in The Boys in the Boat written by Daniel James Brown.