Home > The off-broadway beginning of "A Chorus Line"...
Click image to enlarge 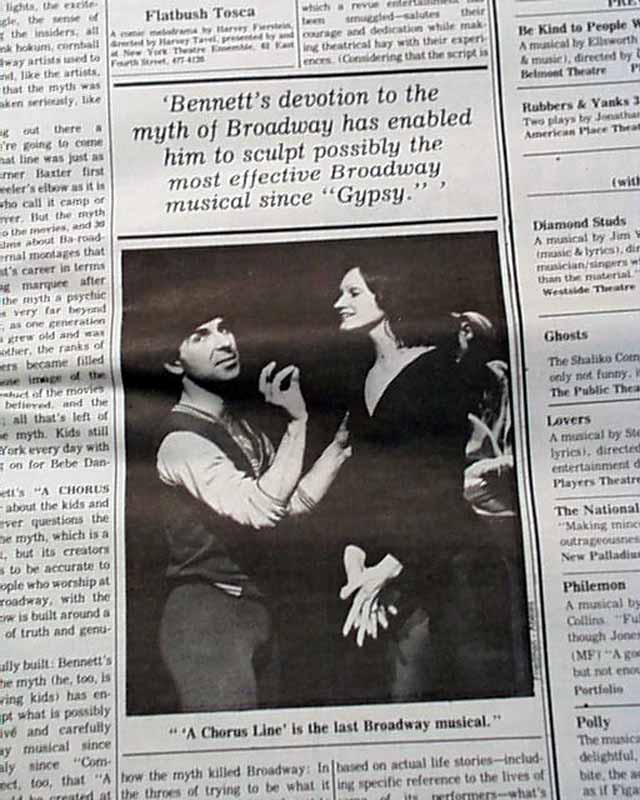 
THE VILLAGE VOICE, New York, June 2, 1975 A great issue reporting the very beginning of what would become a Broadway mega hit, "A Chorus Line". This issue reviews the musical during its off-Broadway beginning.
It is worth noting that "The Village Voice" was an American news and culture paper, known for being the country's first alternative newsweekly. Much of it content focused on the Greenwich Village world in New York City with an emphasis on art and theater. So it is not surprising that it would be very early in reviewing new, up & coming theatrical works.
"A Chorus Line" began off-Broadway on April 15, 1975 and advance word-of-mouth had created such a demand for tickets that the entire run sold out immediately. It would move to Broadway three months later & would go on to become the longest-running production in Broadway history until surpassed by "Cats" in 1997.
The centerfold has a rather small bit under the "Theatre" heading noting: "A Chorus Line": An effective & highly polished musical about people whose who life is the musical. Sometimes draggily sentimental, but plenty of bright spots and a topnotch cast. It may be the last great example of a dying species."
Further on there is a much lengthier review spread over 2 pages headed: "Believing the Myth" by Michael Feingold and which includes a photo from the production (see).
The complete 120 page issue, tabloid-size, never bound nor trimmed, folded at the center, very nice condition.