Home > Back to Search Results > The Siege of Petersburg...
Click image to enlarge 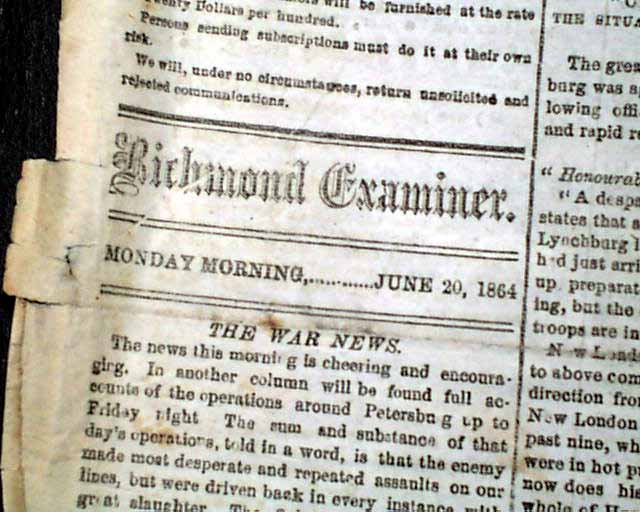 The Siege of Petersburg...

One of the more successful newspapers from the Confederacy, and from its capital as well. The front page includes nearly two columns headed: "The War News" which begins: "The news this morning is cheering and encouraging...the enemy made most desperate & repeated assaults on our lines but were driven back in every instance with great slaughter..." with much more. Some of the subheads include: "The Enemy About Suffolk" "Fitzhugh Lee's Fight with Sheridan" "The Enemy's Conduct In Staunton" "From General Lee's Army" and more. Included is a letter of congratulations signed in type: R. E. Lee, General.
There is more war reporting on the front page with: "City Intelligence" "Crazy Prisoners" "Escaped From the Enemy" "A Negro Killed While Stealing" "Latest From the North" "General Sturgis' Expedition" "General Morgan's Expedition" "The Situation In Georgia--Position of the Two Armies--Prospect of the Impending Battle" and more.
The back page has a lengthy editorial beginning: "A violent struggle for the possession of Petersburg was made on Friday though the public of the city were ignorant of the fact until Saturday night..." with much more. Further on is: "Our people are now beginning to comprehend--though long reluctant--to what a point of desperation this most infernal Yankee warfare has attained..." with much more. Also on the back page; "The Fighting Around Petersburg--Full Particulars--Operations of Friday" and "From Charleston".
Complete as a single sheet newspaper with a one column masthead, typical from the South late in the war as most paper mills were in the North. Folio size, never bound nor trimmed, a bit ragged at the left margin, otherwise very nice.