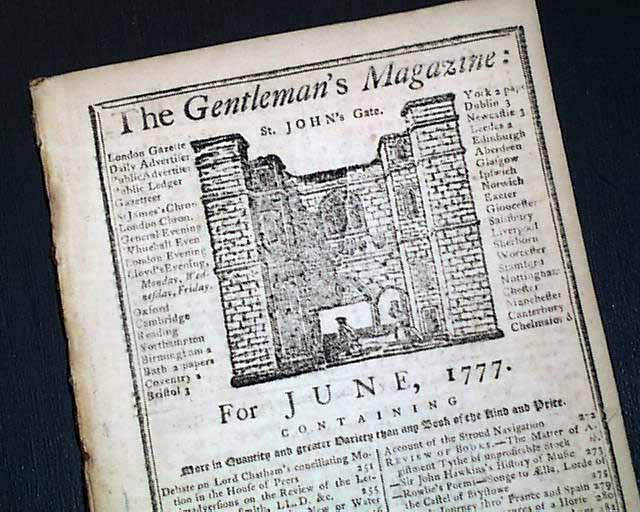 Nearly five pages are taken up with: "Debate in the House of Lords...Relative to the American War" which obviously has much concerning the Revolution, including reference to America declaring itself independent.
Another page has a "Proclamation" signed in type by William Howe, from New York, on "...Restoring peace to the colonies..."  which is good reading (see for the full text). Near the back is a great & detailed: "Extract of a letter from Howe to Germaine" from New York, talking of battles at Danbury Bound Brook, plus other affairs in the vicinity, taking a full page (see). This is followed by a letter to "Earl Percy on his leaving Rhode Island".  The leaf with the latter two reports has part of the outer margin missing, just touching some letters but not causing loss of readability (see)
Included is the full page plate of the 'New or Water Tower at Chester" (see).
Complete in 46 pages, 5 by 8 1/4 inches, very nice, clean condition save for the noted leaf.

A nice issue from the midst of the Revolutionary War offering a perspective into life in the "mother country" when it was at odds with its colonies, which just recently declared their independence.