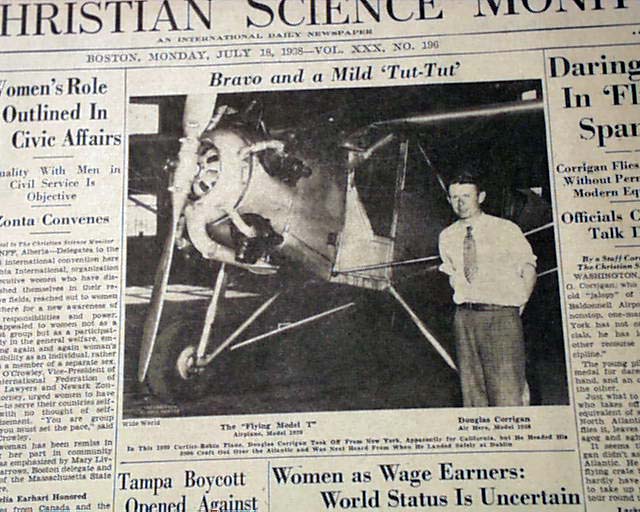 
THE CHRISTIAN SCIENCE MONITOR, Boston, July 18, 1938  The front page has a nice photo of Douglas Corrigan with his plane headed: "Bravo And a Mild 'Tut-Tut' " with the caption noting: "...Douglas Corrigan took off from New York apparently for California, but he headed his $900 craft out over the Atlantic and was next heard from when he landed safely at Dublin."
The two column head notes: "Daring Young May In 'Flying Model T' Spans the Atlantic" with subheads: "Corrigan Flies to Dublin Without Permission or Modern Equipment" "Officials Cheer; Talk Discipline" "Airman Pilots '29 Plane From New York to Eire in 28 Hours" "Aviation World Amazed by Feat".
Daniel Corrigan would forever be known as "Wrong-Way Corrigan".
Fourteen pages, a bit irregular at the spine, very nice condition.