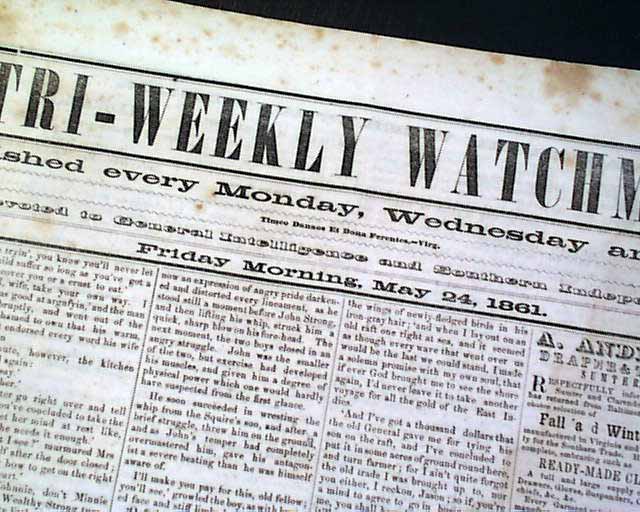 Never before have we offered a newspaper from Sumter, S.C. The title as printed at the top of pages 2 & 3 is “Sumter Tri-Weekly Watchman”. Within the masthead is printed: “Devoted to General Intelligence and Southern Independence.”  Perhaps the most historic report is the page 2 column head: “Secession Of North Carolina!” “One of the Confederate States!!” “North Carolina Free---Lincoln’s Military Despotism Repudiated” with the report containing the text of the “Ordinance” titled: “To dissolve the Union between the State of North Carolina & the other States united with her under the compact of Government entitled the Constitution of the United States.” With more.
Also in this issue are: “The Mad Dance of the Fanatics” “Another Engagement” “To Major Robert Anderson” “Inducements to Join Lincoln’s Army” “The News From Norfolk” “South Carolina Volunteers” “Arrival Of More Troops at Old Point!” “Missouri Out of the Union” “The Affair Near Norfolk” and other items. Another interesting report is a letter “To Major Robert Anderson [of Fort Sumter fame] from New Orleans concerning the return of 29 Negro slaves.
Four pages, never bound nor trimmed, 2 holes at the blank spine margin, various light water staining & some dirtiness. A very rare title from the Confederacy.