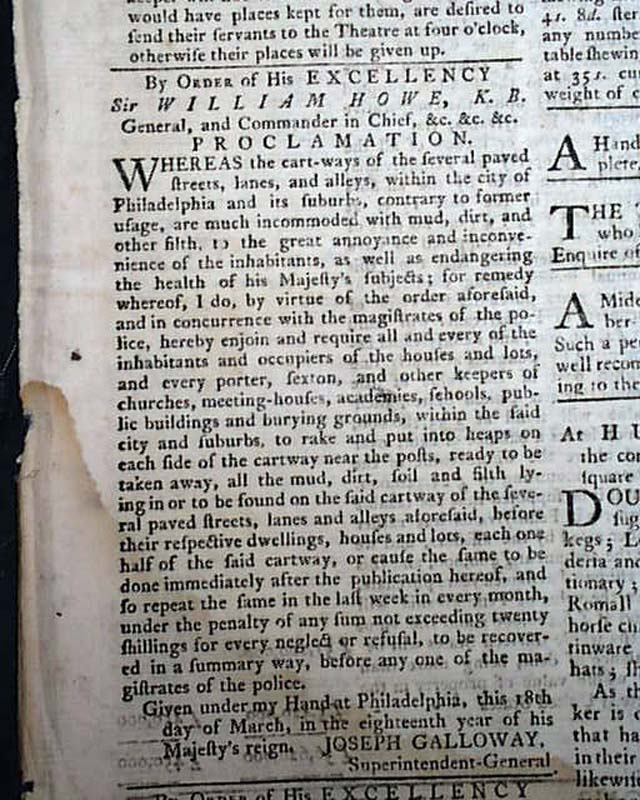 
THE PENNSYLVANIA LEDGER OR THE PHILADELPHIA MARKET-DAY ADVERTISER, March 25, 1778

This was a strongly Tory (supportive of the British cause) newspaper which began in 1775 and closed shop in May of 1778 when the British evacuated Philadelphia.
The front page has two Proclamations headed: "By Order of His Excellency, Sir William Howe, K.B. General & Commander in Chief, etc.", with the full text of both seen in the photos below. The balance of the ftpg. is taken up with ads.
Most of pg. 2 is taken up with a large chart headed: "The United States of America, in Account with the Continental Congress" with an introductory paragraph which includes: "...undoubted right to know at all times, with exact precision, the state of all public debts. Whenever they are kept in ignorance...they have every reason to be jealous of their rulers..." with much more.
Page 3 has a curious report mentioning: "...that the illustrious patriot Dr. Benjamin Franklin has been assassinated in his bed chamber...the villain left him for dead; but one of the Doctor's ribs prevented the stab from being instantly fatal, & he lay in a languishing condition when the vessel failed that brings this account..." with more (see). Pg. 3 has a war-related report from Fishkill, and another report which begins: "The king's troops have lost only one man killed since their going into the Jerseys..." with other items on the war (see), including bits such as: "...A correspondent remarks that Mr. Washington's situation must be extremely irksome, or himself (what his worst enemies never accused him of) singularly dull of apprehension..." with more (see).
Another great pg. 2 letter begins: "My Dear Countrymen, I have now served two campaigns, and I can truly say that I had no other view in taking up arms but to secure my Liberty upon constitutional principles..." with much more). Pg. 3 also has a poem "Written by a private soldier in the British light infantry" which begins: "Great Washington, thou mighty son of Mars, Thou thund'ring hero of the rebel wars!..."
Most of the back page is taken up with a: "Continuation of Mr. Washington's Letters.", this one datelined New York, July 15, 1776, "To Mr. Lund Washington" who was a distant cousin of George Washington & lived at Mount Vernon, serving as business manager from 1765 to 1785. The letter begins: "Last Friday the British fleet was seen off Staten Island..." also includes a tremendous amount of great content, including: "...it is a pity, methinks, that Congress had not had better information on this subject; if they had, it is to be presumed they would not have precipitated the declaration of independency so as to preclude all possibility of negociation...I have not adopted this opinion, that we might have peace with Great Britain, on terms which would, once, have been thought most honourable...Yesterday a letter was brought to me making overtures for a negociation from Lord Howe. I had expected it...Words could not have told him more strongly that our resolutions were to assert & maintain our independency..." with so much more. The letter is signed: G.W.
Four pages, light damp stain to a lower corner, numeric notations in margins next to ads, generally very nice condition. Not surprisingly, being a Tory newspaper the masthead features an engraving of the Royal coat-of-arms.