Home > Back to Search Results > With the rare foldout plate of Campus Martius at Marietta, Ohio...
Click image to enlarge 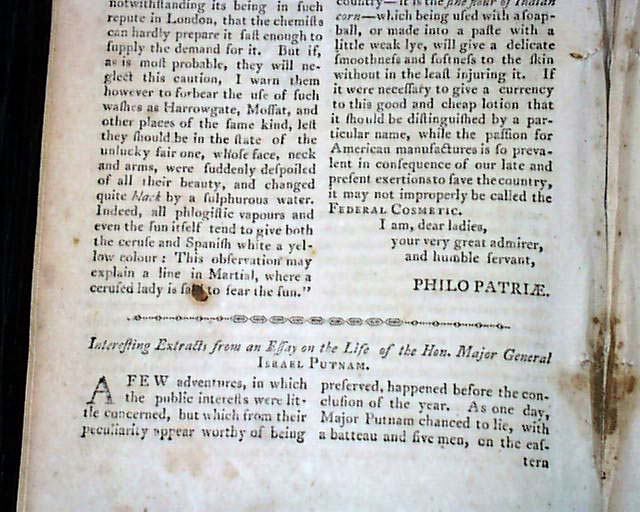 With the rare foldout plate of Campus Martius at Marietta, Ohio...

Articles include: "To the Ladies on the Use of Cosmetics" "Interesting Extracts from the Life of General Putnam" which takes over 8 pages; "On the Religion, Language & Sciences of the Gypsies" "An Account of Campus Martius at the City of Marietta, Territory of the United States North-West of the River Ohio". Marietta was the first permanent settlement in the Northwest Territory.  The accompanying (and very rare) foldout plate of Campus Martius is still present.
Near the back is: "American Intelligence" with the latest news reports of the day including nice details on the state of Maryland calling for a convention to discuss & hopefully ratify the newly proposed federal Constitution. Other news reports as well.
Lacking the other plate called for.
Complete in 52 pages, full title/contents page, 4 3/4 by 8 inches, scattered foxing, nice condition.