Home > Back to Search Results > Editorial paints a positive picture for the Confederacy...
Click image to enlarge 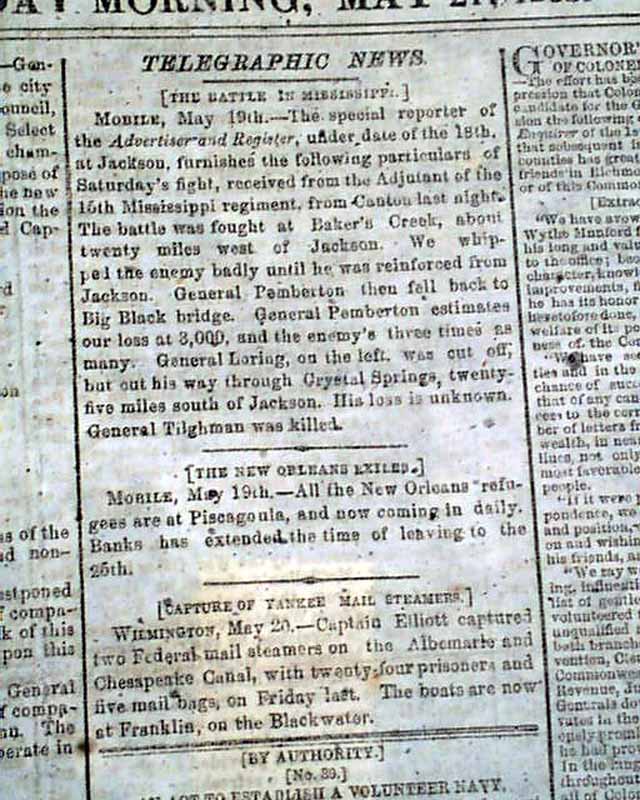 Editorial paints a positive picture for the Confederacy...


DAILY RICHMOND EXAMINER, Virginia, May 21, 1863  The front page has much reporting from the "The Courts" and "City Intelligence" as well as several Acts from the Confederate Congress including: "An Act to Establish a Volunteer Navy". There are also military reports from Mobile & Wilmington.
The back page has a lengthy editorial beginning: "The Federal army on the Rappahannock will lose certainly sixty & perhaps seventy more  regiments before this month is ended...The Federal army will therefore be weaker at the beginning of the next month than it will ever again be..." with much more on this (see for beginning). The editorial also comments on various military battles.
The back page also includes: "Additional From The North" "General Morgan's Raid Into Kentucky" and "The Stoneman Expedition--Report of General Averhill's Part of the Operations".
Complete as a single sheet newspaper with a full banner masthead, never bound nor trimmed and in great condition.