Home > Back to Search Results > The Civil War, post-Gettysburg...
Click image to enlarge 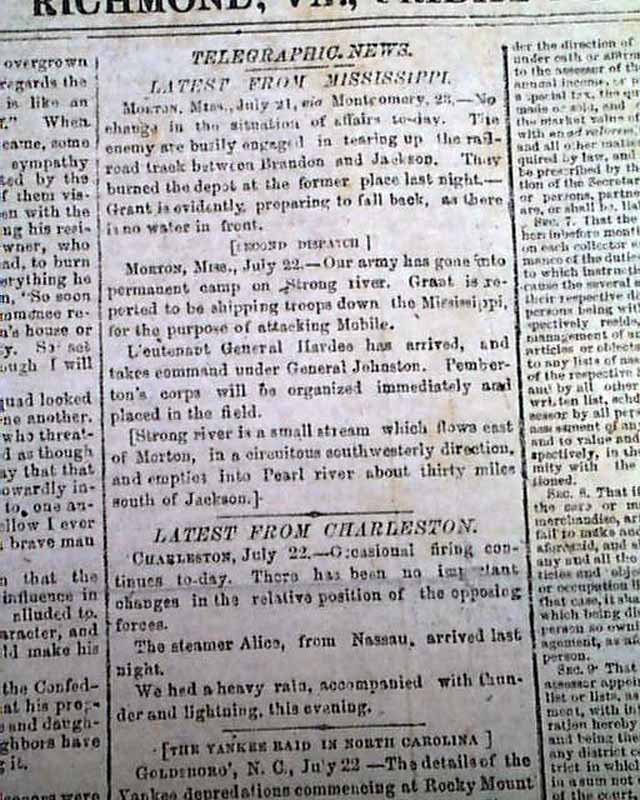 A nice newspaper from the capital of the Confederacy. More than half of the front page is taken up with the printing of "An Act For the Assessment & Collection Of Taxes" in the Confederacy. Other ftpg. items include: "Latest from Charleston" "Latest From Mississippi" & other smaller reports with small heads including: "The Army Intelligence Office" "The Yankee Raid In North Carolina" and more.
The back page has a lengthy editorial, and also several reports on the Civil War including: 'Operations Before Charleston" "The Assault On Battery Wagner--Desperate Effort of the Enemy--Full Particulars of Their Repulse--Address of General Beauregard to His Troops--the Feeling In Charleston" "France & Intervention" "Morgan's Expedition Reported Captured--Sharp Cavalry Fight on the Potomac--The Enemy Driven Back Across the River--Attack On Charleston" "Additional From the North"  "The Raid On Wytheville" The Wounded Confederates At Gettysburg" and other smaller items.
Complete as a single sheet newspaper with a banner masthead, never bound nor trimmed and in very nice, clean condition.