Home > Back to Search Results > Uncommon Confederate title with 'Lincoln's Letter at the North'...
Click image to enlarge 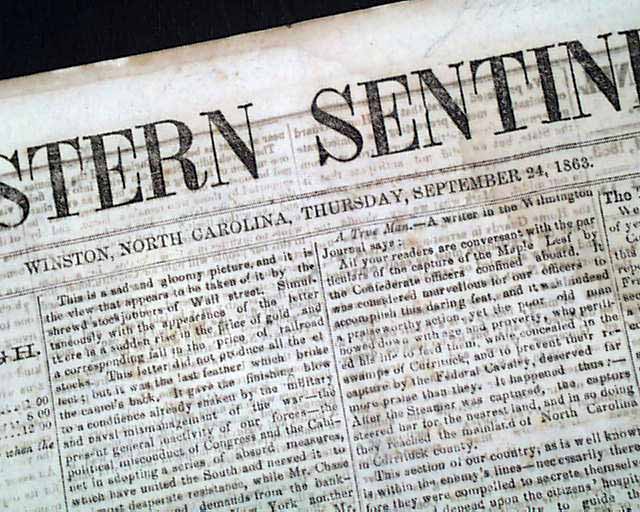 Uncommon Confederate title with 'Lincoln's Letter at the North'...


WESTERN SENTINEL, Winston, North Carolina, September 24, 1863  This is a very rare title from the Confederacy. According to Brigham only four institutions in the United States have any holdings of this title from the Civil War, most just a few scattered issues. The American Antiquarian Society has no issues recorded from this era.
The front page contains several war related reports including a lengthy item taken from the "New York World" headed: "Lincoln's Letter at the North" which begins: "We quite agree with the President, that so long as the South maintains this temper, there is no chance of restoring the Union by a compromise..." with much more, taking half of the page (see for portions). Also on the ftpg. are: "Northern Opinion" "Policy of the Lincoln Administration" and "The Troubles in Iredell and Wilkes" which concerns deserters from the Civil War.
The inside pages have much on the Civil War as well, with items headed: "The News" "The Supreme Court in Extra Session" "Chattanooga" "Charleston" "An Honorable Peace" "The 'Peace' Bubble" "The Execution of Ten Men" "More War Ships and a bit more.
Half of the back page is taken up with advertisements but also includes: "A Proclamation by the Governor of North Carolina" which takes an entire column. One of the advertisements is headed: "Wanted for the Soldiers 200,000 pounds cherries, seeded...".
Complete in four pages, light water stain in the upper right, a few minor margin tears, and a small piece from the blank upper left of the front leaf causing no text loss, small area of paper weakness on the back leaf affects about 5 words, otherwise nice.

Newspaper from the capital of the Con...