Home > Back to Search Results > Don Drysdale in World Series... Dodgers vs. Yankees... with photo...
Click image to enlarge 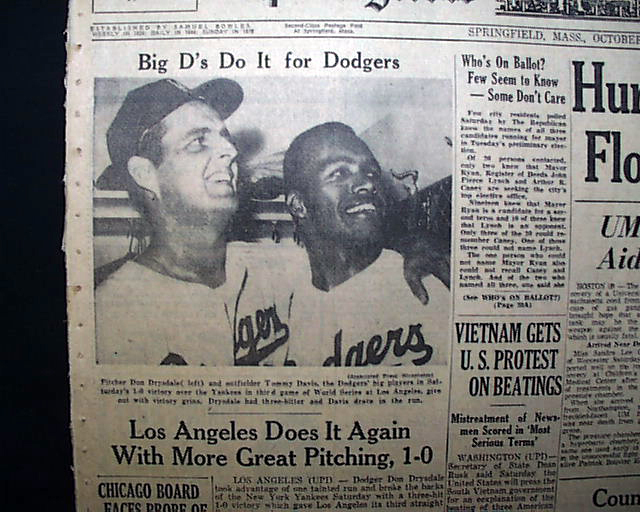 Don Drysdale in World Series... Dodgers vs. Yankees... with photo...


SPRINGFIELD REPUBLICAN, Springfield, Massachusetts, October 6, 1963  The front page has a three column-wide, two line head "Los Angeles Does It Again With More Great Pitching, 1-0" with an accompanying photo of pitcher Don Drysdale and outfielder Tommy Davis with a header "Big D's Do It for Dodgers". Further coverage is on the front page of the Sports Section with a headline "Dodger's Drysdale Baffles Yanks, 1-0..." with subhead "Dodgers Go Three Up With Tense Triumph" "Drysdale's Three Hitter Puts Los Angeles One Away From Series Sweep; Tom Davis Drives In Only Run In First". Two additional photos are included.
Another article is on page 3 in the Sports Section "'It's Getting Better All the Time' Says Grinning Walt Alston" "Drysdale Calls Win 'My Greatest Victory'" "Relaxed Dodgers Agree That Third Game Triumph Was One of Pitcher's Best Games; Alston Won't Predict Sweep".
Other news, sports and advertisements of the day are within.
This is complete in 138 pages with several small binding holes along the left spine, otherwise in very nice condition.