Home > Back to Search Results > "Twelve Years A Slave"...
Click image to enlarge 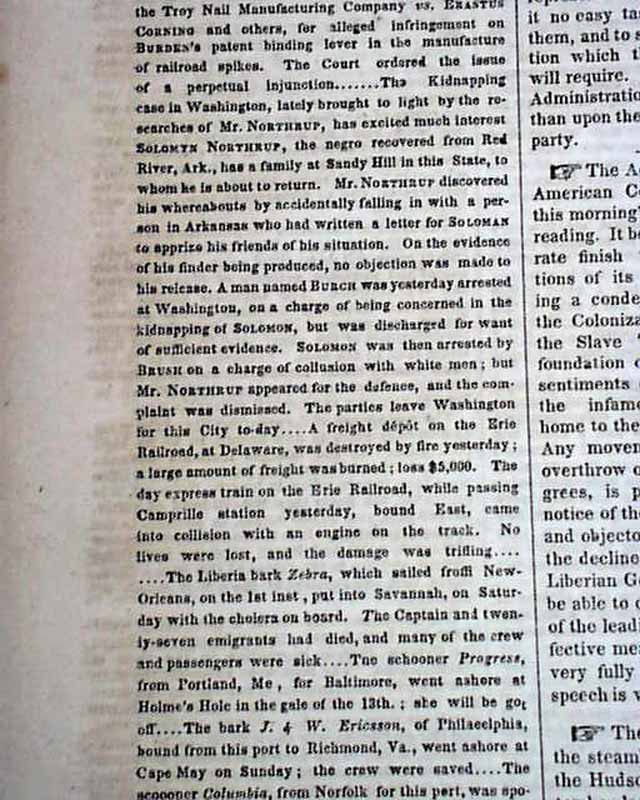 The back page has a report from Washington which includes, in part, some details  of the 1841 abduction and subsequent enslavement of freedman Solomon Northup as described in his 1853 memoir "Twelve Years a Slave" and depicted in the 2013 Oscar-winning film based on his account. Part of the subhead notes: "...the Kidnapping Case--Experiences of the Rescued Man...".
The text reads in part: "...The kidnapping case grows in interest. James H. Burch...was arrested...that the accused had had the kidnapped man in his possession at a negro pen, & sold him to go to New Orleans...says he was drugged at night & carried into the pen & was shipped severely when...he attempted to assert his freedom...Burch then got out a warrant against the negro, whose name is Solomon Northrup..." with further detail including
Solomon Northup was born a free man & married a free woman of color and started his family. During a trip to Washington, DC, the farmer and violinist was drugged, kidnapped, and sold into slavery for a period of twelve years, the majority of which were spent under the ownership of a cruel and punishing master. In 1853 Northup regained his freedom thanks to the efforts of an itinerant Canadian carpenter named Samuel Bass with whom Northup had confided his story of enslavement.
Solomon Northup [erroneously spelled both Northrup and Northrop in this and other publications of the day] and his horrific experience garnered national attention as the newly free Northup worked with his Northern allies to prosecute the slave traders in Washington, D.C. who were responsible for his kidnapping.
Additionally page 2 has a report which begins: "The Kidnapping case in Washington, lately brought to light by the researches of Mr. Northrup, has excited much interest. Solomon Northrup, the negro recovered from Red River Ark., has a family at Sandy Hill in this state, to whom he is about to return..." with more.
The unfolding story documented in this newspaper account was of major interest in a country that was increasingly fractured along Northern and Southern lines.
Eight pages, very nice condition. A bit fragile and should be handled carefully.