Home > Back to Search Results > Lincoln is assassinated... A first report... He is still alive!
Click image to enlarge 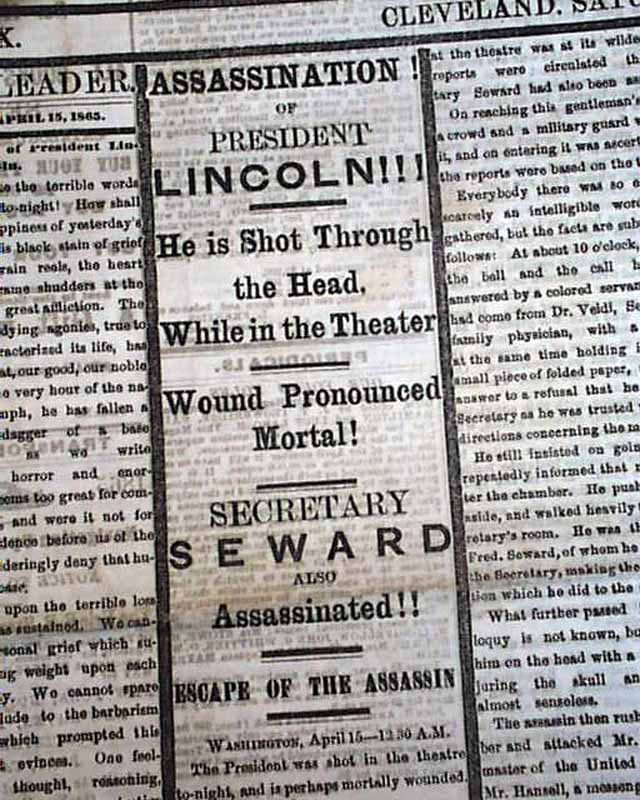 Lincoln is assassinated... A first report... He is still alive!

The top of the front page  has dramatic one column heads: "ASSASSINATION!" "Of PRESIDENT LINCOLN!!!" "He is Shot Through the Head While in the Theater" "Wound Pronounced Mortal!" "Secretary SEWARD Also "Assassinated!" "Escape of the Assassin".
The front page has various dispatches, the 2nd of which notes: "The President is not expected to live throughout the night. He was shot at the theatre." The 3rd dispatch has considerably more detail, including: "...a sharp report of a pistol was heard...a man rushed to the front of the President's box, waving a long dagger...exclaiming 'Sic semper tyrannis!' and immediately leaped from the box...to the stage beneath...it was found that the President had been shot through the head above & back of the temporal bone & that some of the brains were oozing out..." with much more. Further on are more timely reports dated 1:30 a.m. of the 15th headed "Second Edition" with more detail.
Of special note is that this edition was sufficiently early that the President was still alive at the time it went to press, not typically found with newspapers reporting the assassination.
Four pages, never bound nor trimmed. Three folds with almost no fold wear. Some foxing & light dirtiness to the top quadrant and minimal margin wear. All columns on the front and back pages are black-bordered with "mourning rules" for the death of Lincoln. Generally in nice condition.