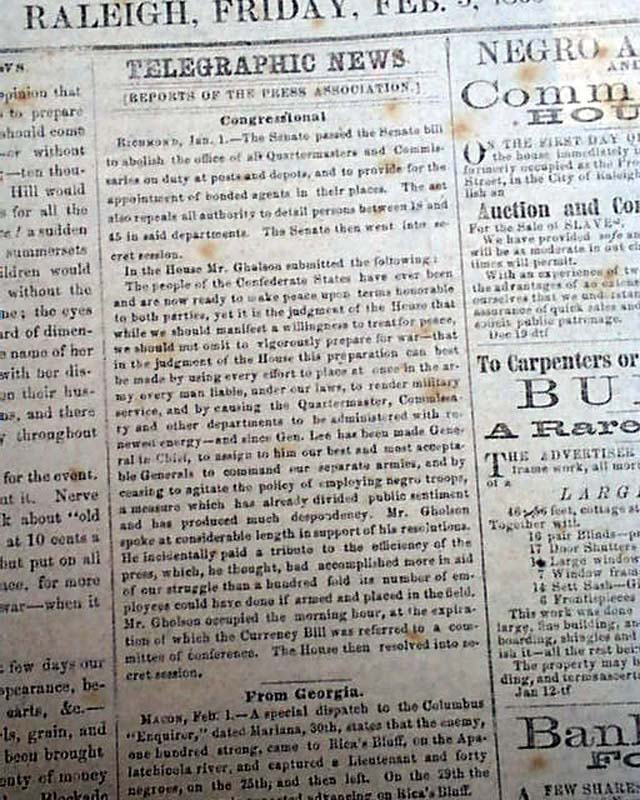 
THE DAILY PROGRESS, Raleigh, North Carolina, Feb. 3, 1865  Raleigh was one of the last major cities of the South to fall into the hands of Sherman, surrendering on April 13, 1865, just one day before Lincoln was assassinated. This rare Confederate title is from just over 2 months before surrendering.
The top of the front page has an item from the Confederate Congress which begins: "The people of the Confederates States have ever been & are now ready to make peace upon terms honorable to both parties...and since Gen. Lee has been made General in Chief, to assign to him our beset & most acceptable Generals to command our separate armies..." with more. The top of the ftpg. also has an ad: "Negro Auction And Commission House!" with details.
Page 2 has an item: "The Departure of the Commissioners" which begins: "We have already announced to departure of the peace commissioners for Washington..." with more.  Another item has near the beginning: "...the country may plead, women & children may suffer, starve & die on account of a protraction of this fratricidal war...". There is also more than a column with: "WAR NEWS" which has subheads including: "Gen. Lee Appeals to Georgia For Supplies" "Courage & Tenacity Wanted At Charleston" "From Hood's Army" and "Wilmington".
Complete as a single sheet newspaper which is typical for late-war issues from the South as most of the paper mills were in the North. Very nice condition.