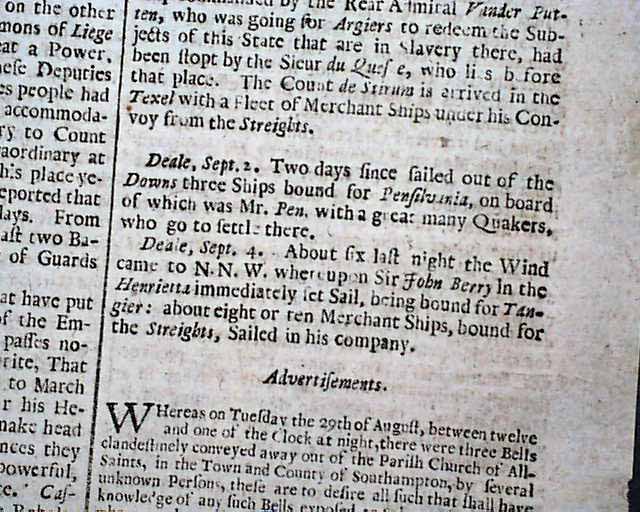 Rarely are we able to offer exceedingly historic events which are reported with such brevity, simplicity & inconspicuousness. But here is one.
The back page has a one sentence item datelined "Deale, Sept. 2" which reads: "Two days since sailed out of the Downs three ships bound for Pensilvania, on board of which was Mr. Pen with a great many Quakers, who go to settle there."
History verifies this report, as the internet notes that: "The Ship Welcome sailed from Deal, England, departing August 31, 1682, and arrived at the mouth of the Delaware River (New Castle) on October 27, 1682, later anchoring at Chester, Pennsylvania (October 28). William Penn and friends then went to Philadelphia."
This would be the only newspaper report of William Penn venturing to America to settle the land known as Pennsylvania, and very likely the first printing of the word "Pennsylvania" in any periodical. I could find no report in the Gazette of the king granting the charter to Penn in 1681, and as such this September 7 issue would be the foundational issue of any newspaper collection on the history of Pennsylvania.
This is just the second issue of this date we have encountered in 38 years. Complete as a single sheet newspaper, 7 by 11 inches, in very nice condition with uncommonly wide margins.