Home > Back to Search Results > Yankees beat the Giants in the first subway series...
Click image to enlarge 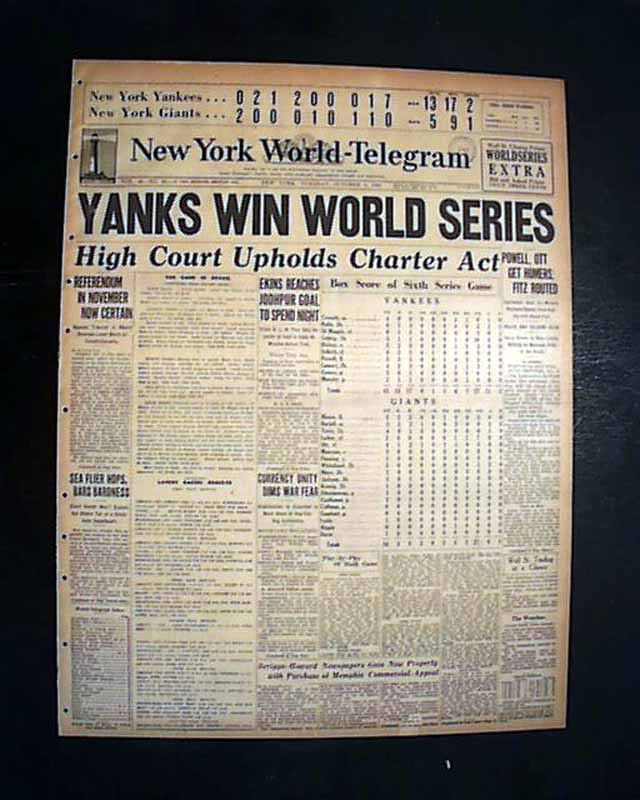 Yankees beat the Giants in the first subway series...

A great banner headline announcing the Yankees winning the 1936 World Series over the Giants: "YANKS WIN WORLD SERIES". Taking much of the front page is the: "Box Score of Sixth Series Game".
One column heads include: "Powell, Ott Get Homers; Fitz routed" "Castleman Goes Inn--Murphy Replaces Gomez, Fans Koening with Bases Full" "Rolfe And Selkirk Slug".
This was the first "subway series" as both teams were from New York. And this was the DiMaggio and Gehrig era, noth noted in the box score and the "Play-by-Play Of Sixth Game".
The sports page has a banner headline: "45,000 See Giants Battle Yankees in Sixth Series Game" with related articles.
Terrific to have this report in a New York City newspaper, where the entire Series was played.
Complete with all 42 pages, light toning, some small binding holes along the spine, nice condition.