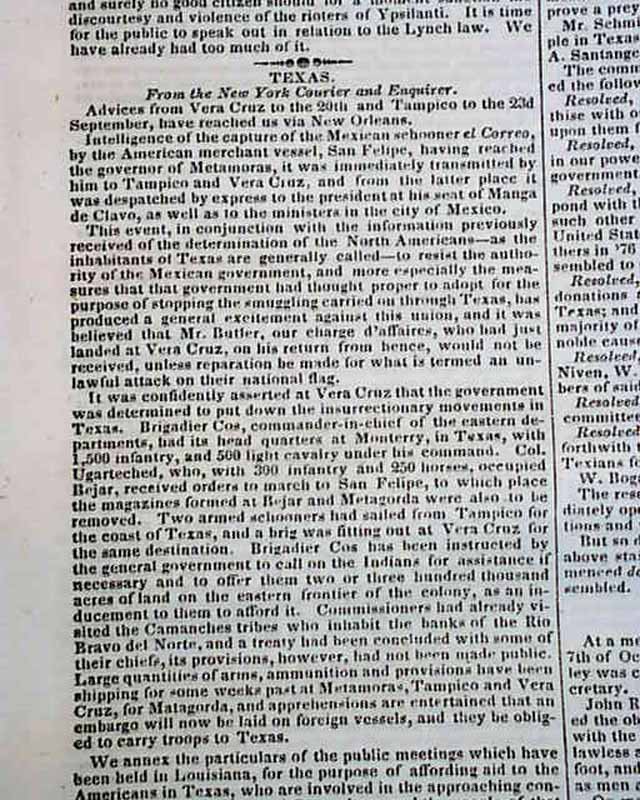 
NILES' WEEKLY REGISTER, Baltimore, Nov. 7, 1835  Inside has 2 1/2 pages of news under the heading: "Texas" concerning events from the beginning of their war for independence. The reports seem to reference the Battle of Gonzales (first battle of the Texas war for independence) but there is no direct mention of it.
Included are: "....It was confidently asserted at Vera Cruz that the government was determined to put down the insurrectionary movements in Texas..."  At a: "Meeting at Natchitoches" is reported: "...to express our sympathy with the inhabitants of Texas who are about to suffer from the lawless & tyrannical attempt to trample their liberties under foot & to deprive them of the rights & immunities to which as men and as freemen, they are entitled...Whereas, the rights & liberties of our fellow countrymen of the neighboring province of Texas are endangered by the violent & despotic course of general Santa Anna..." with more.
Included also is a letter: "To his Excellency Andrew Jackson, President of the U.S." which is signed in type by 7 men, including Samuel Houston.
Yet another item includes: "A WAR OF EXTERMINATION has commenced in Texas, and our fellow countrymen are to be driven (if assistance is not rendered), AT THE POINT OF THE BAYONET from their homes & fire sides!..." (see).
There is also much on the needed protection from Indians in the vicinity, which also is related to the Battle of Gonzales.
Sixteen pages, 6 1/4 by 9 3/4 inches, very nice condition. 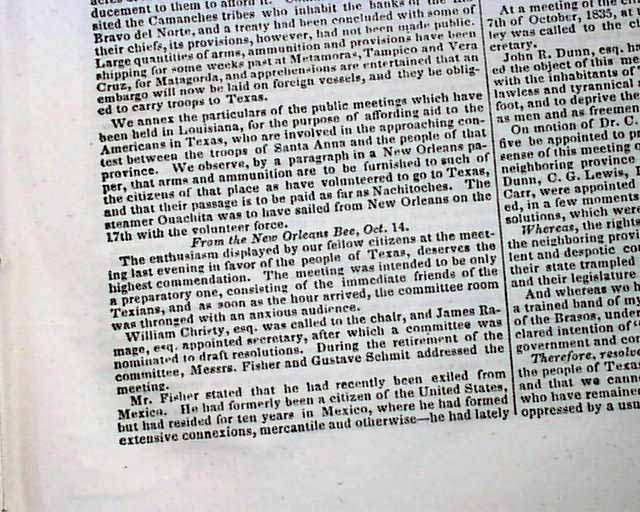 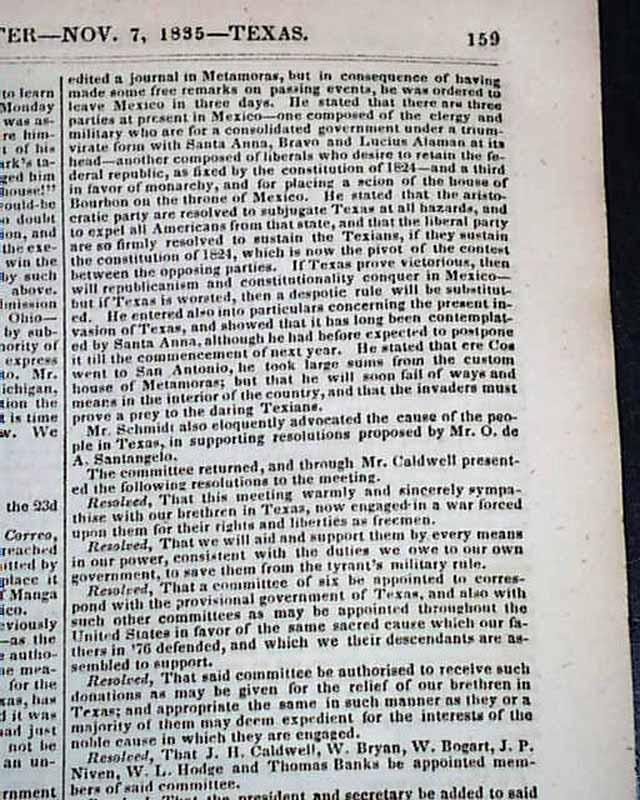 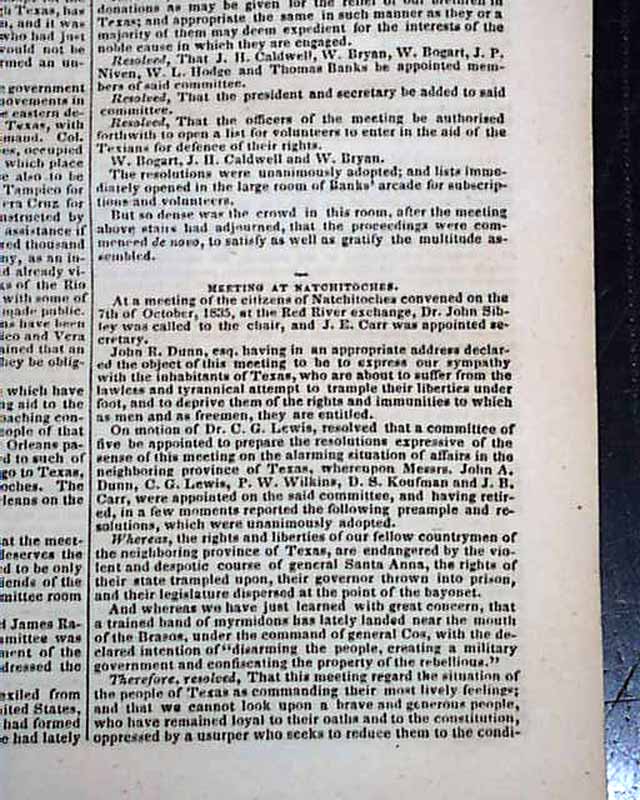 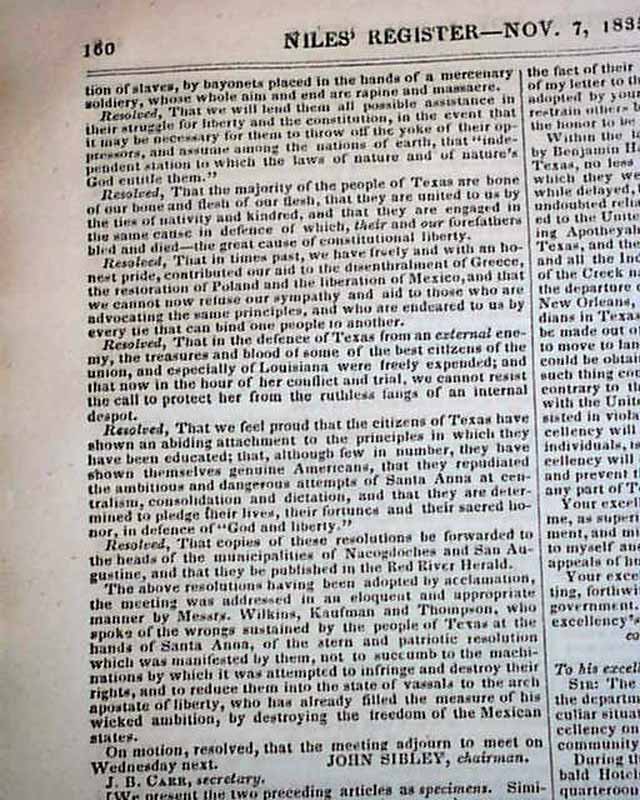 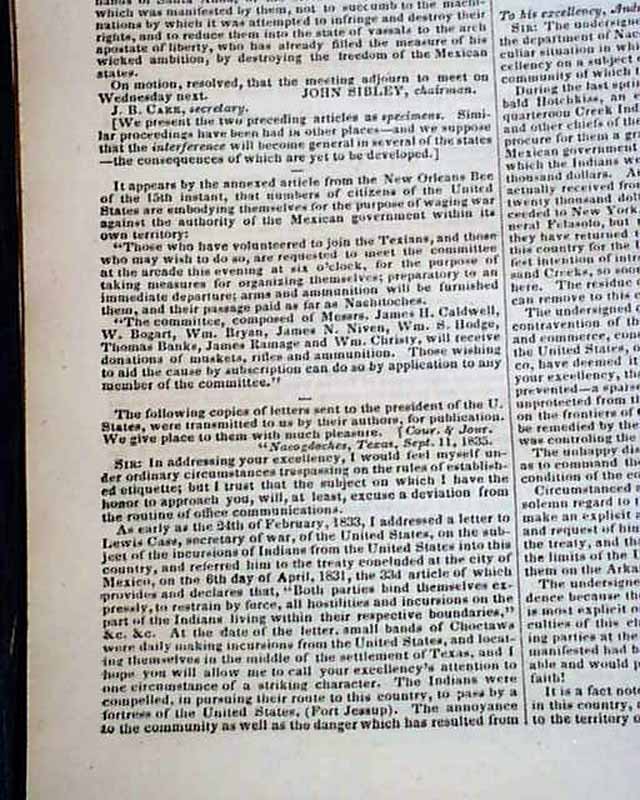 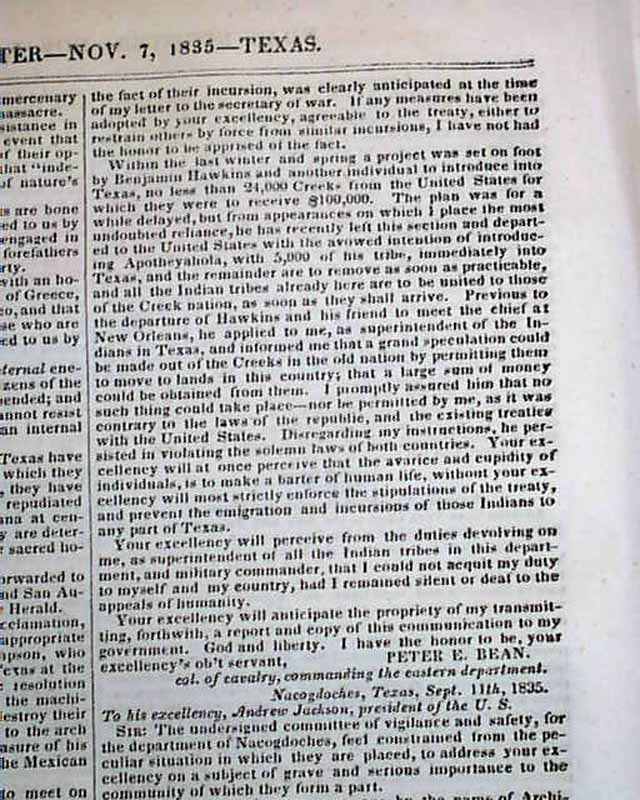 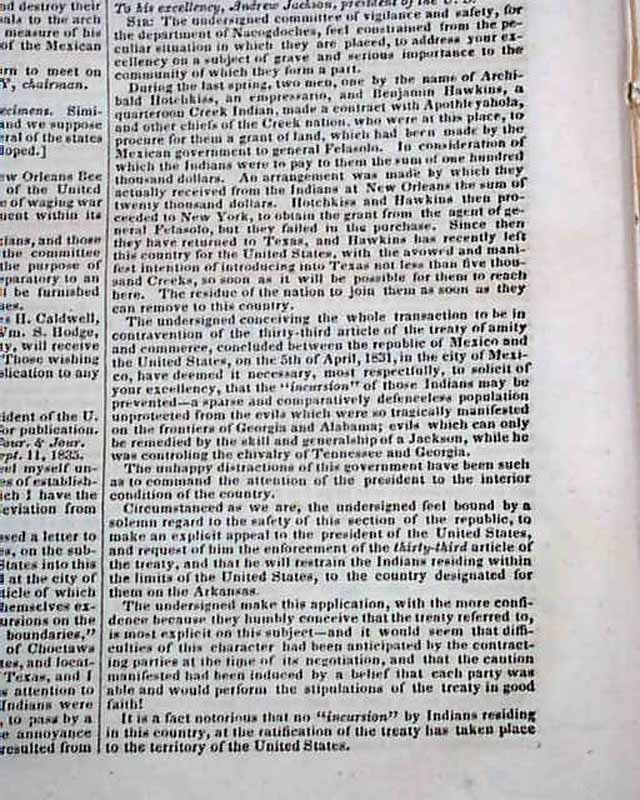 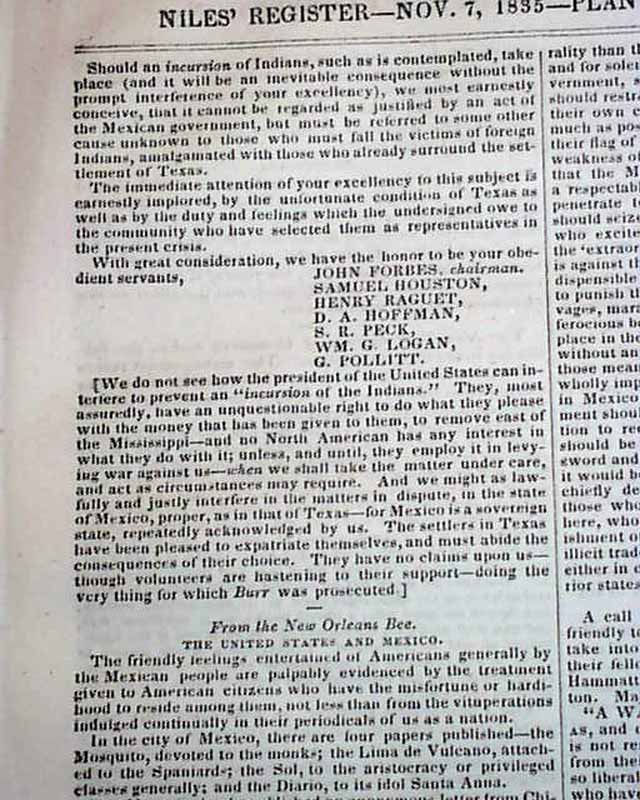 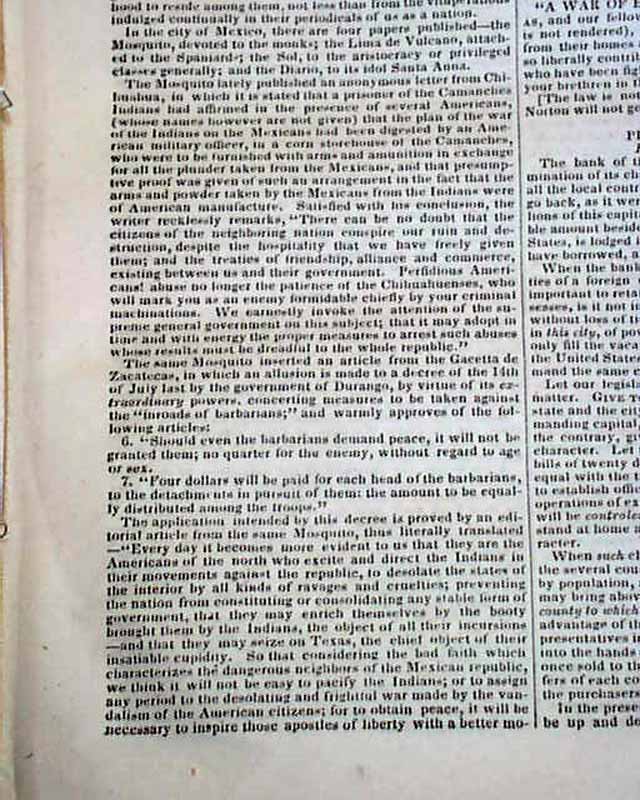 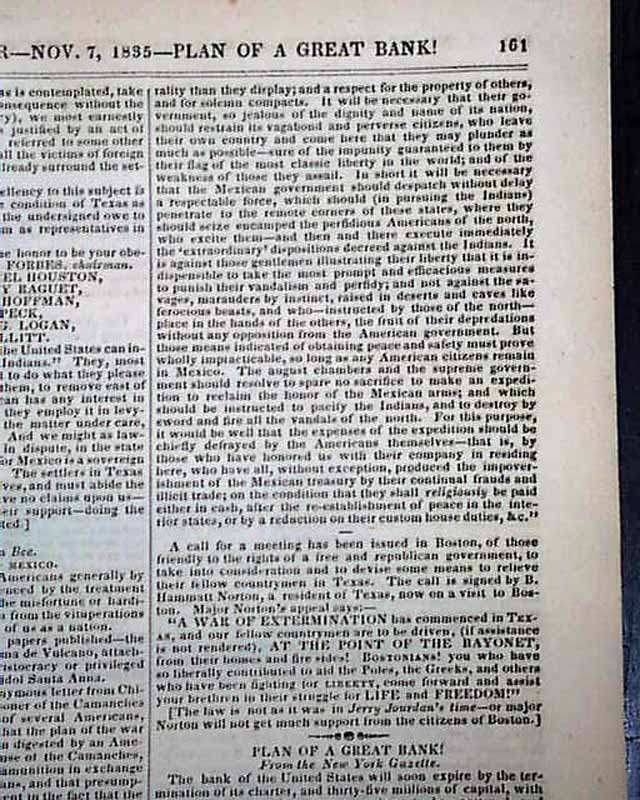 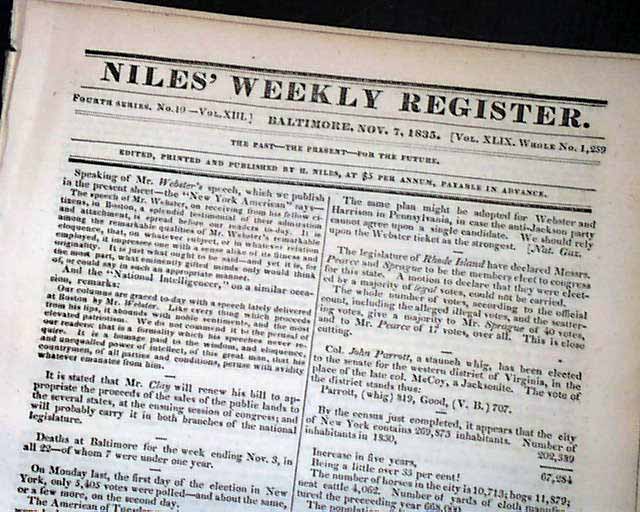 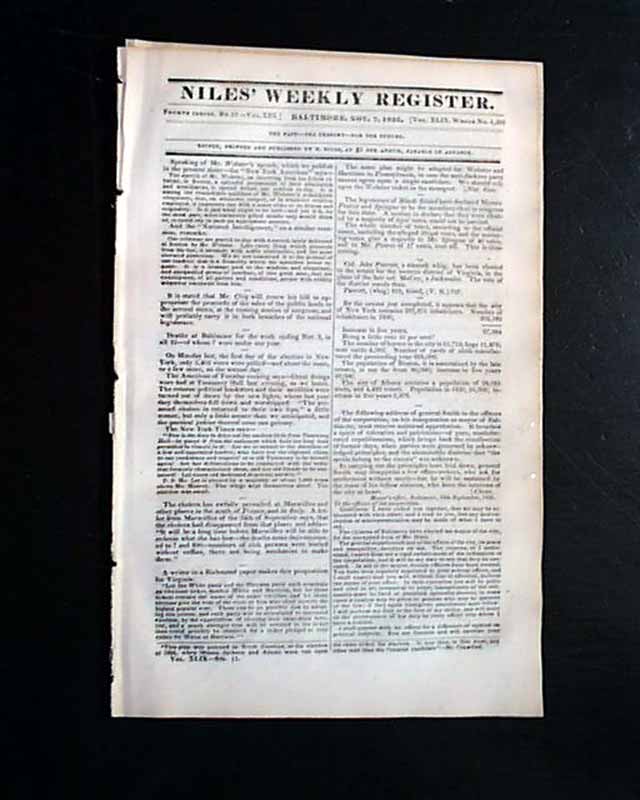