Home > Back to Search Results > "Night of broken glass" in Berlin signals the beginning of the Holocaust...
Click image to enlarge 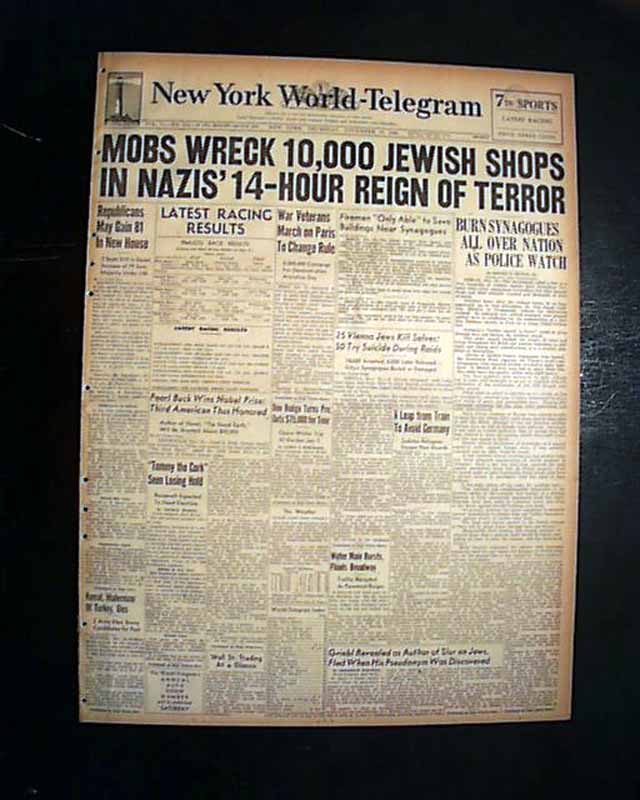 "Night of broken glass" in Berlin signals the beginning of the Holocaust...


NEW YORK WORLD-TELEGRAM, Nov.  10, 1938  A two-line banner headline announces what was to become known as Kristallnacht, the "night of broken glass".
"MOBS WRECK 10,000 JEWISH SHOPS IN NAZIS' 14-HOUR REIGN OF TERROR" with subheads: "Burn Synagogues All Over Nation As Police Watch". The article carries over to page 33.
This was a deliberate persecution of the Jews of Germany on November 9 and 10, carried out by paramilitary forces. German authorities looked on without intervening. The catalyst for the carnage was the assassination of German envoy Ernst vom Rath in Paris by a Polish Jew.
Early reports noted 91 Jews were murdered plus 30,000 Jewish men arrested and incarcerated in concentration camps. Jewish homes, hospitals & schools were ransacked as buildings were demolished by sledgehammers, destroying 267 synagogues throughout Germany Austria & the Sudetenland and over 7000 Jewish business either destroyed or damaged.
This headline is larger than most reports in other American newspapers. The N.Y. Times of the same date had just a one column headline.
Complete in 56 pages, small binding holes at the blank spine, very nice, clean condition.